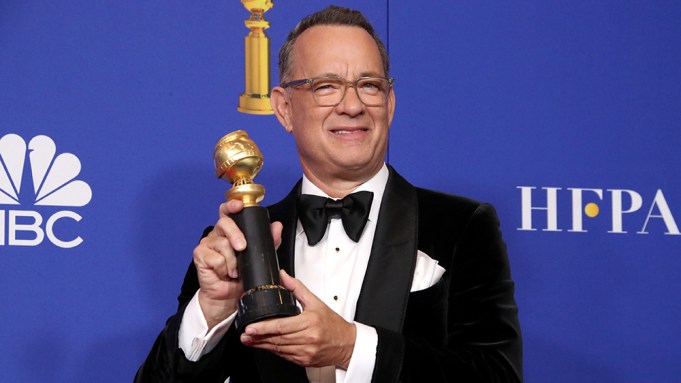 Hanks, in fact, is about to play a bad guy for Baz Luhrmann and thrilled for the opportunity to prove he can flex those muscles.

“My current plan is, I’m about to go to Australia to work with Baz Luhrmann,” Hanks said, adding his thoughts were with victims and volunteers caught in devastating brush fires. The actor will star opposite Austin Butler in Luhrmann’s forthcoming Elvis biopic, playing the icon’s shifty talent manager.

“The plan is, I’m playing Colonel Tom Parker, and silence all your stupid questions about why will I never play a bad guy,” Hanks joked. Though Hanks said this would be his first villainous role, his little-seen tech thriller “The Circle” saw him as an evil, cultish CEO.

Hanks went on to talk about his philosophy on likability, which has powered the actors through decades of top performances, which he cultivated from, of all people, Keanu Reeves.

“I have worked briefly with Keanu, and he gets the, ‘How is it to be so well liked?’ I feel the same way he does, it’s preferable to the alternative. I’d rather be appreciated than loathed,” he said.
Hanks was presented with the Globes’ lifetime achievement award named for Cecil B. DeMille, and gave a rousing and often emotional speech that revisited his entire career, and lessons learned through his craft. Luhrmann’s Elvis biopic is expected in 2021.