Tom Hanks Chokes Up During His Cecil B. DeMille Golden Globes Speech 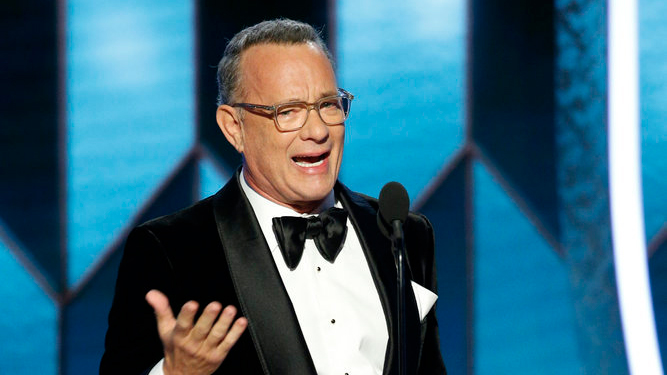 Tom Hanks got emotional a few times at the 77th annual Golden Globes awards while accepting the Hollywood Foreign Press Assn.’s Cecil B. DeMille Award for his impact on the industry as an actor, producer, writer and director. Charlize Theron, who starred in “That Thing You Do,” directed by Hanks, introduced the honoree, saying, “While Tom does give us the chance to see ourselves on screen, he also presents a vision of who we could be.

“He stands for all the qualities we aspire to, both onscreen and off. He gives us enough laughter to weather our storms,” Theron continued, introducing a montage of Hanks clips ranging from “The Love Boat” and “Family Ties” to Oscar-winners like “Forrest Gump” and “Philadelphia.”

The always-humble Hanks started out his speech saying, “Most of the people in this room, I would pay to see them get their cars washed. But how many people in this room have a clip package that includes ‘The Love Boat?'” he asked, warbling a few bars of the show’s theme song.

He choked up twice while thanking those who had helped him in his career, ascribing the emotion to a recent cold. “I can’t tell you how much your love means to me,” he told his wife, Rita Wilson, and children who were sitting at the table.

Hanks paid tribute to some of the directors of his films: “I have never not been challenged or flummoxed or lost sleep because of the work of the directors that I’ve worked with, every single one of them, Steven [Spielberg] and Ron [Howard], Paul [Greengrass], Bob [Zemeckis], Clint [Eastwood] and every one of those guys at some point or another came up to me in the course of a day and said, tomorrow, if you don’t do your job really well, we don’t have a movie.”

He recalled his first internship, when the director of the Great Lakes Shakespeare Festival told him and the other young actors after a night of partying, “You have got to show up on time and you have to know the text and you have to have a head full of ideas, otherwise I can’t do my job. That was the greatest lesson a young actor could possibly ever get.”

The eight-time Golden Globe winner choked up again as he finished his speech. He explained a vintage filmmaking term, “There is a saying in motion pictures, back when it was shot on film, that you could not move on to the next scene until the gate was good. Thank you all here, thank you all for all your inspiration and all of your work and all of the struggle that you guys all go through in order to hit the marks and, I have checked the gate. The gate is good. Thank you.”

The DeMille award is reserved for an individual who has made a lasting impression on the film industry. Recipients are decided upon by the HFPA’s board of directors. Past honorees include the late Robin Williams, Denzel Washington, Robert De Niro, Jodie Foster, Steven Spielberg, Sophia Loren and Sidney Poitier.

News of Hanks’ award was announced weeks prior to the ceremony. “For more than three decades, he’s captivated audiences with rich and playful characters that we’ve grown to love and admire. As compelling as he is on the silver screen, he’s equally so behind the camera as a writer, producer and director,” HFPA president Lorenzo Soria said in statement at that time. “We’re honored to include Mr. Hanks with such luminaries as Oprah Winfrey, George Clooney, Meryl Streep, Martin Scorsese and Barbra Streisand to name a few.”

Hanks is also nominated for a Golden Globe for his role as Fred Rogers in Marielle Heller’s “A Beautiful Day in the Neighborhood.”