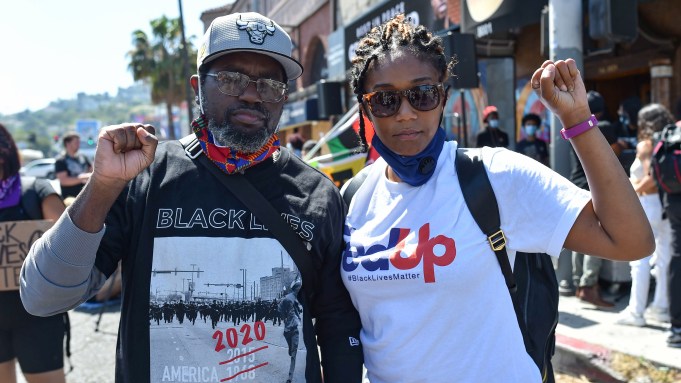 Haddish, best known for her roles on TV show “The Last O.G.” and movies like “Girls Trip” and “Night School,” spoke out against police brutality and white privilege.

“I’m tired of being afraid that my brother’s gonna go outside and get shot. I’m so tired of all this violence,” Haddish said. “I really believe in the power of cussing somebody out. Say your words, and then go on about your way. Why can’t we just do that every now and then? I would love to just be able to cuss the police out and not be afraid.”

Despite ongoing racial injustice, Haddish pointed to a brighter future for Black people.

Pookey Wigington, film producer and president of HartBeat Productions, also spoke at the protest and gave a heartfelt introduction to Howery.

“I see a young man in the audience and I know he doesn’t want me to say his name, but I am anyway, because he’s what I call the future,” Wigington said. “That guy has a voice. That guy is a businessman. That guy is going to make the difference because they don’t let a lot of us through the door.”

Howery, known for his work in “The Carmichael Show” and “Get Out,” gave an impassioned speech about how Black Lives Matter is a lifestyle, not just a movement.

“I know when we go back to work we’re going to be excited to be making money again and all that s—, but this is our lifestyle now,” Howery said. “I was just telling my friend, like as much as you plan a brunch, I want to be able to go to my friend, ‘Oh, I got a protest at 12:00.'”

He also emphasized the need to diversify all aspects of Hollywood, from writers rooms to crew to hair and makeup.

“Anybody that’s an entertainer out here — an actor, producer, a director — now is the time to put more pressure on them to make these f—ing writers rooms diverse for real. Have real productions with more Black people in them,” Howery said. “If we’re doing a Black f—ing show, I shouldn’t be having these motherf—ers that ain’t Black explain to me what kind of light should be on my face.”