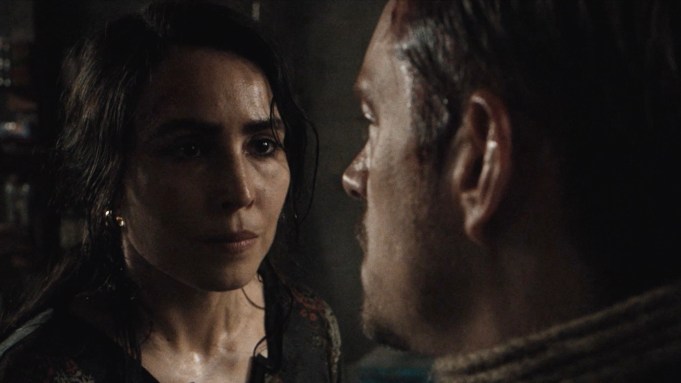 Bleecker Street has released the first trailer of “The Secrets We Keep,” a drama starring Noomi Rapace, Joel Kinnaman and Chris Messina, set to premiere Sept. 16 in theaters and Oct. 16 on VOD.

In the suspenseful trailer a woman (Rapace) living in the American suburbs, reveals her biggest secret to her husband (Kinnaman).

“I always told you that our family wasn’t in the war – that’s not true. We were sleeping some German soldiers, farmers. They did horrible things to the woman, worse than you can imagine,” says Rapace in the trailer.

“What’s the likelihood that a guy that attacked you halfway around the world, 15 years ago — he ends up two blocks away,” says Kinnaman.

Rapace replies: “Louis, he’s in the trunk of our car.”

“The Secrets We Keep,” set in post World War II, follows a woman, Maja, rebuilding her life with her American husband. Holding onto the trauma of war, she kidnaps her neighbor (Messina) and seeks vengeance for the war crimes she believes he committed against her.

Yuvual Adler directed from a script by Ryan Covington. The Israeli native began his career with “Bethlehem,” which earned awards at the Venice Film Festival, Taipei Film Festival and Israeli Film Academy.

Bleecker Street has secured U.S. distribution rights to the upcoming thriller in May. “Yuval’s film is propelled by exciting performances from Noomi, Joel and Chris in this chilling post-WWII thriller,” said Bleecker Street CEO Andrew Karpen. “We look forward to bringing the film to audiences nationwide.”