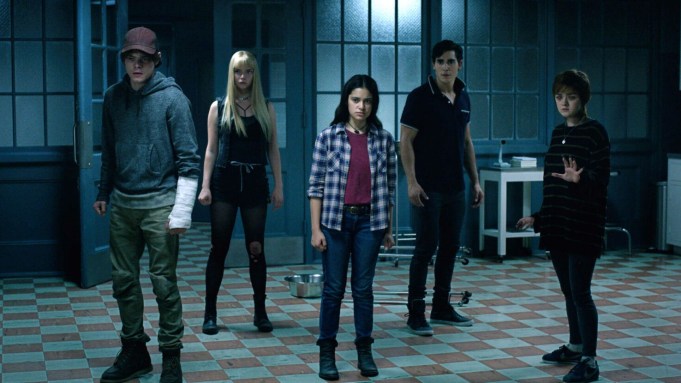 While it’s still unclear when “The New Mutants” may finally — finally! — open in theaters, fans who have waited over two years for the movie’s release at least got an extended first look at the film during its Thursday panel at the virtual fan convention Comic-Con@Home.

The 30-minute panel — featuring stars Maisie Williams, Anya Taylor-Joy, Charlie Heaton, Alice Braga, Blu Hunt, and Henry Zaga, and writer-director Josh Boone (“The Fault in Our Stars”) — opened with a cheeky teaser trailer that acknowledged the superhero horror film’s five release dates starting with April 13, 2018, with each date crossed out in favor of a new one. The teaser ended with the promise that “The New Mutants” will open “in theaters” on August 28, 2020 — followed with a speech bubble that read “Fingers Crossed.”

The decision to keep “New Mutants” to its release date is especially noteworthy given that right before the “New Mutants” panel began, Disney announced a major reshuffle to its release schedule for 2020 and beyond — including pushing the “Star Wars” and “Avatar” titles back a year — due to uncertainty over when theaters can reopen amid the COVID-19 pandemic. And indeed, “New Mutants” still may have to vacate its Aug. 28 date if enough theaters cannot open safely in time.

Throughout the panel, Boone and the cast joked openly with moderator Ira Madison III about how the film has seemed “cursed.” So as a reward to patient fans, the presentation concluded with the debut of the opening scene from the movie. After the opening titles, we hear Hunt’s character Danielle “Dani” Moonstar (a.k.a. Mirage) speak about an “old Native American proverb” that says each person has two bears inside them, one good, one evil, at war for the person’s soul.

Then the film cuts to Dani waking up in bed to the sound of explosions. Her father races into her room, pulls her from bed, and tells her to run as fast as she can. They emerge from their home to what seems like the end of the world, with fire and explosions booming all around the trailer park where they live. Dani’s father tells her to hide inside a tree while he goes back to help others, but after some screams, she sees his burned, lifeless body land in front of her. Dani screams, and runs, with what sounds like a massive creature racing behind her.

She slips and falls down a hill, hitting her head hard. When she wakes up, she’s handcuffed to a hospital gurney, with Williams’ Rahne Sinclair (a.k.a. Wolfsbane) staring down from a ventilation shaft above her. The scene then shifts to a trailer for the film.

When audiences will actually get to see the full movie is still unclear thanks to COVID-19, but the rest of the panel unfolded as if the film very much will open on Aug. 28, complete with marketing devices like Twitter emojis, poster giveaways, and even a sweepstakes for an advanced screening of the film. Boone’s deadpan reaction to the announcement of the latter: “Wear a mask.”

“The New Mutants” has indeed endured a tortured path to theaters, thanks to reported reshoots that never seemed to materialize and the vagaries of Disney’s multi-billion-dollar acquisition of 20th Century Fox through much of 2018 and 2019. Throughout that process, the movie’s release dates have come and gone, but the panel emphasized that at least some fans of the Marvel Comics title have remained dedicated to the project, including showcasing fan art of many of the characters from the film.

“There are fans who have stolen every frame from the trailers to try to put together the movie,” Boone said with a smile, before joking that just before the film actually opens, an asteroid will hit the Earth.

At one point, artist Bill Sienkiewicz, whose designs inspired the look of the movie according to Boone, joined the panel to showcase a variant poster he created for “New Mutants.”

“People have talked about this being a cursed film, because it’s taken forever,” he said. “But I think in some respects the lockdown has really amped up the interest.”

Thankfully, the panel wasn’t entirely consumed by talk of the film’s cursed release. Williams compared her experience playing the soft-spoken Rahne with her performances as the forthright warrior Arya Stark on “Game of Thrones.”

“I’ve always seen myself as more that character,” Willaims said of Rahne. “I think she’s very uncomfortable in her own skin. … When I play Arya, I have to command the room and be really brave and strong, and that’s kind of exhausting, and I don’t really feel like that.”

Zaga (“13 Reasons Why”) was also exhausted during the shoot, because, he said, he kept avoiding drinking water for a big swimsuit scene that was repeatedly rescheduled. Finally, Boone said he learned what Zaga was doing. “I was like, ‘I would never tell you not to drink water! Go drink water right now!'”

Hunt, meanwhile, talked about how intimidated she was when she booked the central role in the film given that she’d not done “anything but some episodes on a CW TV show.”

She got the role due to her chemistry with Williams; in a first for a superhero movie, “New Mutants” tracks a romance between the two characters.

“It was really wonderful to be able to see a relationship like this,” Williams said. “In the typically masculine world of superheroes, it was just lovely to see these two fragile women who just protect one another and bring light out in each other. … At the heart of it is this really lovely love story.”

Hunt said she was terribly nervous for her audition when she learned part of her chemistry read was a kiss with Williams, then at the height of her “Game of Thrones” fame.

“You cannot imagine how nervous I am,” Hunt said. “Like, ‘Oh, I have to go kiss Maisie Williams?!'”