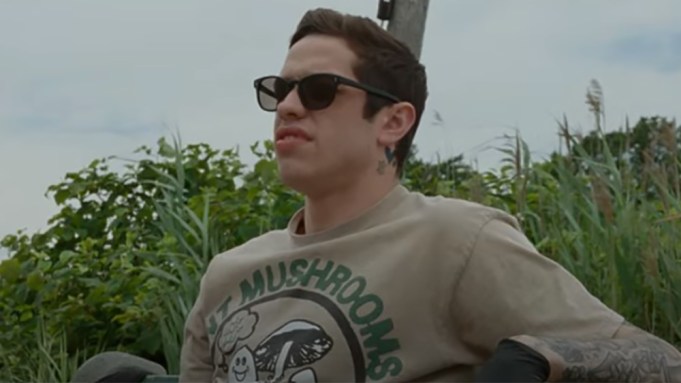 Judd Apatow directed the movie, which incorporates elements of Davidson’s own life, including the loss of his firefighter father on 9/11.

“The King of Staten Island” centers around Scott (Davidson), who has been a case of arrested development since his father died when he was 7. As his younger sister (Maude Apatow) heads off to college, Scott, now in his mid-20s, spends his days smoking weed and giving his friends tattoos. It’s not until his mother (Marisa Tomei) starts dating a new man named Ray (Bill Burr) whom Scott disapproves of, that he begins to finally confront his grief and reevaluate his life.

Bel Powley, Steve Buscemi, Pamela Adlon and Moises Arias round out the cast.

The trailer spotlights Davidson and Apatow’s comedic backgrounds, showing Scott’s friends poking fun at his tattoos and his dad’s death. However, the feature hits somber notes, with scenes of Scott growing closer to his family and fighting back tears while driving.

“The King of Staten Island” was originally set to release in theaters in mid-June. But since the coronavirus pandemic caused movie theaters to close, the film will debut directly on digital rentals services on June 12.