Oscars: ‘The Irishman’ Strikes Out as Netflix Nets Two Wins 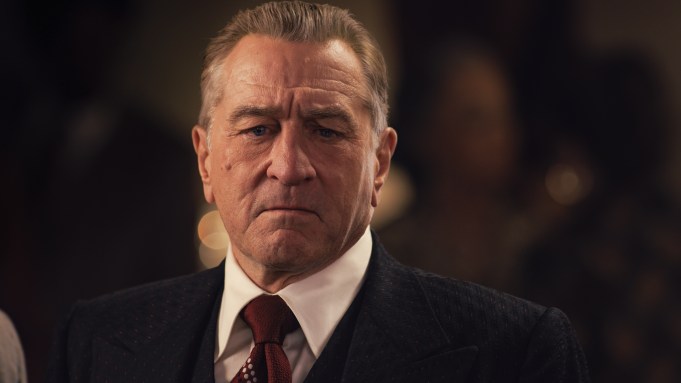 Netflix’s “The Irishman” struck out at the Oscars on Sunday night, despite its 10 nominations.

“The Irishman” has now joined five titles that amount to the Oscar snubs hall of fame that hit double figures in nominations, but wound up with nothing at the awards ceremonies. That roster is led by Steven Spielberg’s “The Color Purple” and Herbert Ross’ “The Turning Point,” which both received 11 nominations. “The Irishman” now joins three other films — Scorsese’s “Gangs of New York,” the Coen brothers’ “True Grit” and David O. Russell’s “American Hustle” — with 10 nominations and no wins.

Netflix also campaigned heavily for “Marriage Story,” which was nominated for six Oscars and won one for Laura Dern for supporting actress. The streamer netted two Oscar wins for the night, including best documentary for “American Factory.”

“The Irishman” starrred an un-nominated Robert De Niro as Frank Sheeran, a mob hit man who became a confidant of Teamsters leader Jimmy Hoffa (played by Al Pacino). The movie is adapted from “I Heard You Paint Houses,” Charles Brandt’s 2004 book. Netflix picked up the hefty $175 million tab, spending a substantial amount on de-aging technology that allows the stars to play much younger versions of their characters.

As the shortened awards season progressed, prospects for “The Irishman” dimmed. It was shut out at the major shows — at the Golden Globes, the SAG Awards, the DGA Awards, the PGA Awards, the WGA Awards and the crafts awards. Its one trophy for best film came from the National Board of Review back on Dec. 3. With no momentum heading into the 92nd Academy Awards, it would have been a surprise for “The Irishman” to have won an Oscar.

Was resentment against Netflix a factor in the shutout? The streaming service has been upending the business and has an uneasy relationship with exhibitors. Last year’s best picture win by “Green Book” instead of Netflix’s “Roma” has been interpreted as a manifestation of Academy members’ discomfort over giving the streamer the top prize after “Roma” had a  limited theatrical release before streaming the film a month later. “The Irishman” used the same tactic, opening in limited release on Nov. 1 with no grosses reported, followed by digital streaming on Netflix on Nov. 27.

“The Irishman” was nominated for best picture for producers Scorsese, De Niro, Jane Rosenthal and Emma Tillinger Koskoff. Scorsese also received a best director nod, the ninth Oscar nomination for Scorsese as a director, making him the most-nominated living director in Academy history. He’s won once for directing “The Departed.”

Pacino and Joe Pesci were nominated in the best supporting actor category. It was Pesci’s third nomination after “Raging Bull” and “Goodfellas,” for which he won the trophy in 1991. It was Pacino’s ninth nomination and his first since “Scent of a Woman” in 1993, when he won his only Oscar.

Cinematographer Rodrigo Prieto received his second Oscar nomination, a dozen years after he was nommed for “Brokeback Mountain.”

Costume designer Sandy Powell received her 15th nomination along with Christopher Peterson getting his first. She had won the category for “Shakespeare in Love,” “The Aviator” and “The Young Victoria.”