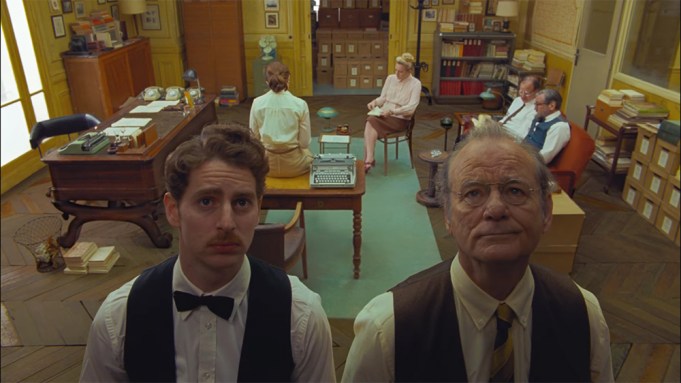 The comedic drama follows a group of journalists at an American newspaper bureau set in a fictional 20th century French city.

Bill Murray stars as Arthur Howitzer Jr., the editor of the French Dispatch,” described in the trailer as “a factual weekly report on the world of politics, the arts — high and low — and diverse stories of human interest.”

“You don’t think it’s almost too seedy this time?” Murray’s character, based on The New Yorker co-founder Harold Ross, asks in the new footage.

The movie follows three separate storylines, one of which follows Timothee Chalamet’s character to the bathtub.

“I’m naked, Mrs. Krementz,” he gasps after Frances McDormand walks in on him taking a bath.

The upcoming film will be Anderson’s 10th directorial effort and his fourth working with Searchlight Pictures, with his previous projects for the studios including “The Darjeeling Limited,” “The Grand Budapest Hotel” and “Isle of Dogs.” Now that Disney owns Fox, “The French Dispatch” will be his second Disney film after “The Life Aquatic With Steve Zissou” back in 2004.

Anderson has been nominated for seven Academy Awards for five of his films, including best picture for “The Grand Budapest” and best animated feature for “Isle of Dogs.”

The film is set to release in theaters on July 24.