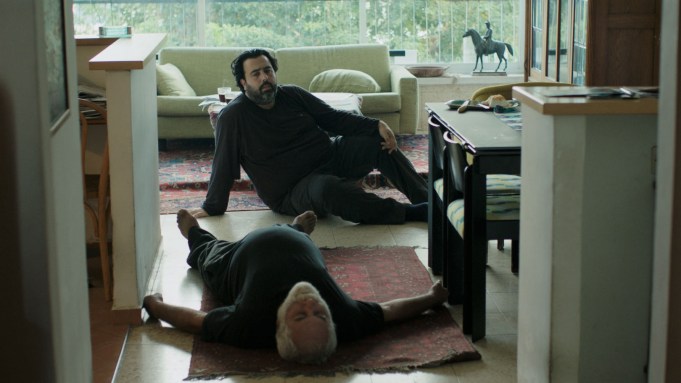 Israeli multi-hyphenate Dani Rosenberg marks his feature debut with “The Death of Cinema and my Father Too,” a self-reflexive hybrid film that mixes fact, fiction and autobiography as it grapples with the big questions.

Presented under the Cannes 2020 label and sold internationally by Films Boutique, the film follows a rising director as he tracks his father’s final days, camera in hand, telling a story culled from Rosenberg’s experience and interspersed with footage from his own life.

“I prefer to call it a fiction film that crashes into the walls of reality,” says Rosenberg. “The narrative itself is fictional, and I used documentary elements from my life to create parallels with this story.”

“I started to make a film with my father once he fell ill,” he explains. “We shot a couple days, and then he felt too weak, so we canceled the shoot. Later, when I wrote and shot this film, I felt something was missing. That something was life itself. So I used the material leftover from my father and in some mysterious way it just worked together, making this a kind of labyrinth.”

“I want to explore the fine line between reality and fiction,” adds Rosenberg. “When I screened the film as a work-in-progress, a producer came up to me afterwards and asked if he could cast my mother in next film.  He was sure she was a professional actor!”

The film was also born out of Rosenberg’s experience in television. After creating the popular dramedy “Milk and Honey,” which sold to the UK’s Channel 4 and was remade for German TV, the director wanted to shake up his style.

“There’s a difference between art and trade,” he says. “Over the past few years, I found that my craft and trade became making narrative stories, and I wanted to turn that on its head.”

He continues: “When I left film school, they said television was the future, and I wanted to part of that future. But after my experience with television, I just had this desire to go back to the place I loved, which is cinema. If cinema is the past, I want to live in the past!”