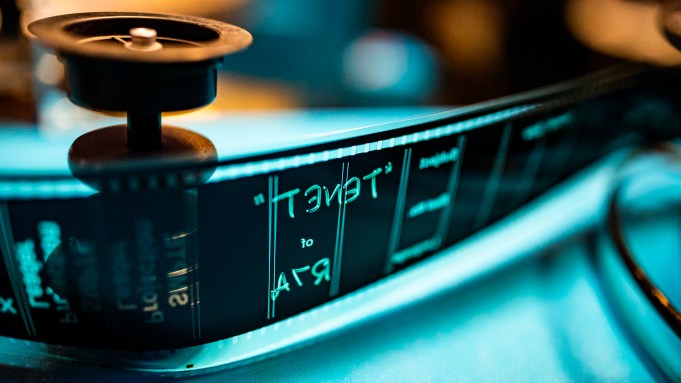 After a months-long industry shutdown due to the COVID-19 crisis, Christopher Nolan’s “Tenet” is breathing new life into Italy’s cinemas, where the film is getting off to a solid start.

The watershed blockbuster pulled in €403,000 ($476,000) from 791 Italian screens on its first day, Aug. 26, selling more than 57,000 tickets, according to Warner Bros. Italy. It’s the first encouraging box office result in the country since the Italian government allowed cinemas to reopen in June. Driven by “Tenet,” roughly half of the country’s screens are now operational.

It’s fitting for the time-bending thriller, which was partly shot in Italy, to be playing in 70MM format at the Cinema Lumière in the central Italian city of Bologna, since the Bologna film archives are known globally as a prime film preservation entity and a temple of pure cinema.

“Nolan is of course a big champion of celluloid,” says the entity’s chief Gian Luca Farinelli, who calls it “a significant twist of fate” that a film by such a staunch defender of the “material aspect” of movies is now becoming so important for the fate and future of moviegoing itself.

“Reopening theaters with a 70MM print of a film by one of the world’s top contemporary filmmakers is an absolutely perfect way of expressing hope that going forward we will indeed have a moviegoing season,” notes Farinelli.

“We are living in a time of great angst and worry. Of big questions,” Farinelli adds. “We really need the radicalism of passionate filmmakers like Nolan, who can also draw big crowds, to prove that movies shown in a theater — even on celluloid — can come back to life.”

The Cineteca di Bologna started having 70MM screenings roughly 20 years ago with a print of Stanley Kubrick’s “2001: A Space Odyssey.” Since then, Quentin Tarantino and Nolan have supported the format, and Bologna has screened all 70MM copies of their films. More recently, Todd Phillips’ “Joker” also played in the format. Bologna is currently physically hosting its prominent Il Cinema Ritrovato festival, dedicated to restored cinematic gems.

The special 70MM “Tenet” screenings at Bologna’s Cinema Lumière are sold out for the next few days.

Besides Bologna, the other Italian venue showing “Tenet” in 70MM is the Cinema Arcadia Melzo in Milan where, in another upbeat indication, the pic is also currently sold out.