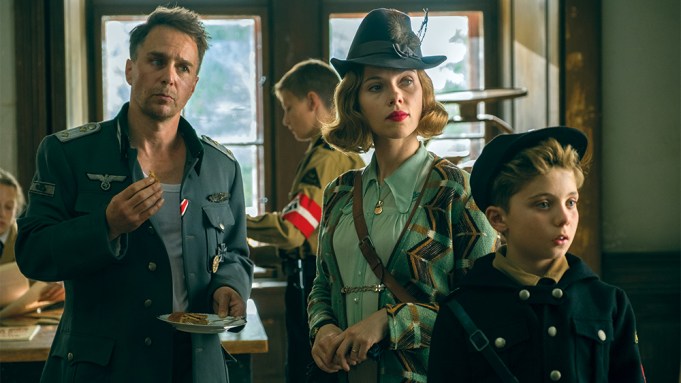 Taika Waititi owes a lot of this awards season to his mother, Robin Cohen. She’s the one who first told him that he should think about adapting Christine Leunens’ novel “Caging Skies” for the big screen.

That suggestion eventually turned out to be “Jojo Rabbit.” Adapted from “Caging Skies,“ the film was written and directed by Waititi. It goes into Oscar night with six nominations, including nods for best picture and adapted screenplay.

The film centers on a young boy, Johannes Betzler (Roman Griffin Davis), in WWII Germany whose imaginary friend is Hitler, played as a clown-ish buffoon by Waititi. Things take a turn when the boy discovers his mom (Scarlett Johansson) is hiding a Jewish girl named Elsa (Thomasin McKenzie) behind a wall in their home.

For the first time, Cohen, a senior tutor at Victoria University of Wellington in New Zealand, is revealing why she brought “Caging Skies” to her son’s attention. “It’s a life-and-death situation conjured by extreme fanaticism. The result is a horrifically surreal reality,” Cohen told Variety in an email. “The key players are a girl trying to stay alive and a fanatical boy who lies to keep her as his victim. Their relationship mirrors fear, pain, cruelty and pathos.”

After the Searchlight film premiered at TIFF, many wondered if a comedy about Nazis was appropriate and how it would do in theaters. Turns out, there was nothing to worry about. The $15 million movie’s worldwide box office is $55 million and growing.

The Hitler character does not appear in the book, but was Waititi’s idea.

“Today, we know Hitler as the evil madman who engineered the torture and murder of millions of people,” said Cohen, who is Jewish. “But if we don’t think more deeply about how he convinced half the world to help him, we leave the door open to a repeat performance. When Taika depicts him as the affable hero of a small boy’s imagination, our idea of Hitler is skewed like a needle scratching across a record. This imaginary Hitler reminds us of an uncomfortable reality — that in the right climate, what we come to imagine can be deadly.”

Cohen said watching Waititi transform into any of the characters he’s played in his career is always “a bit strange, but I was even more startled to see Taika with that mustache.”

In the end, Cohen is a very proud mom. “Before I saw it, I was already happy that ‘Jojo Rabbit’ caused controversy over its portrayal of Hitler and the Nazis,” she said. “Then, watching it, I was proud of the way Taika adapted the themes in the book to reflect sick ideas and behavior that still stalk society.”

In addition to Hitler, Waititi also added the Nazi characters Fraulein Rahm (Rebel Wilson) and Finkel (Alfie Allen). “I was especially pleased with Taika’s cartoonish presentation as a way to ridicule fascism,” Cohen said. “For me, it’s a brave, clever, wryly funny film that, best of all, ends with hope.”

Speaking with Variety at the DGA Awards earlier this month, Waititi said, “Any of these awards, any of these moments, I do share with my mother…The film is a lovely letter to mothers. I wrote Scarlett’s character as a mix of not only great characters I’ve seen in film, but my mother is in there as well.”