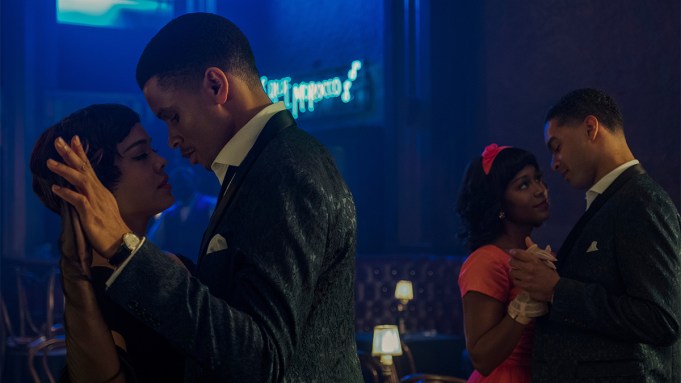 Amazon Prime Video subscribers will find “Sylvie’s Love” under their trees this year.

The Tessa Thompson romance has landed a Dec. 25  global premiere date on Prime, following the streaming giant’s acquisition of the project at January’s Sundance Film Festival.

Written and directed by Eugene Ashe, the film currently has a 100% fresh critics score from Rotten Tomatoes and was sold in the high seven figures, Variety previously reported.

Set in the late 1950s, Thompson’s Sylvie dreams of a career in the budding world of television while she helps out around her family’s New York City record store and counts the days until her fiancé returns from war.

A handsome saxophonist named Robert (Nnamdi Asomugha) interrupts her best laid plans, and the pair’s friendship gives way to palpable sexual chemistry and a profound love that changes them both. Winding through the decades, the film charts the intersecting lives of the lovers and the sacrifices they make for their dreams.

The Amazon Original will serve as an at-home option in a crowded field of December theatrical hopefuls — all of which feel tenuous as major American movie theater markets currently remain closed. Those releases include “Wonder Woman 1984,” “News of the World,” and the Aretha Franklin biopic “Respect.”

“They don’t make ’em like this any more, innocent and escapist and scrubbed clean of contact with real grubby life. But then, given the poor history of Black representation in the Hollywood movies of the Golden Age, ‘they’ never really did,” wrote Variety critic Jessica Kiang in her review from Sundance, “Perhaps this small act of retroactive redress is enough of a reason to make such a wildly old-fashioned, fantasy-bubble period romance.”