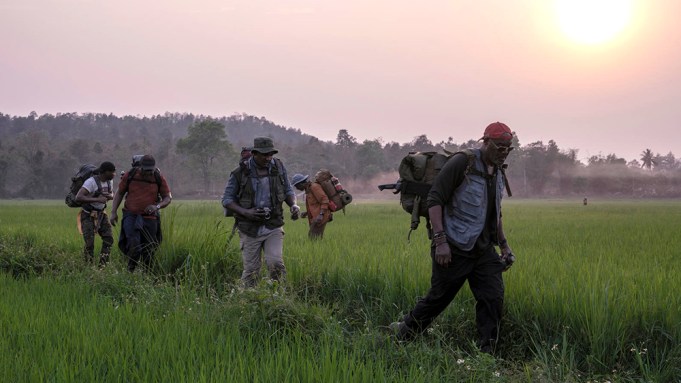 The movie tells the story of Paul (Delroy Lindo), Otis (Clarke Peters), Eddie (Norm Lewis) and Melvin (Isiah Whitlock, Jr.), four veterans who go back to Vietnam in search for buried treasure and the remains of their squad leader (Chadwick Boseman). Accompanied by Paul’s son (Jonathan Majors), the four vets embark on an adventure that helps them confront their trauma.

The trailer flashes between vintage footage of the Vietnam war and the four veterans exploring the country in their return, with the Chambers Brothers’ emblematic “Time Has Come Today” serving as a theme song. The friends are shown as young soldiers in battle in one scene, and dancing in a club with “Apocalypse Now” meaningfully playing in the background in the next. Clips of war protests, Nixon’s resignation speech and the friends searching for their buried treasure are all juxtaposed throughout the trailer’s two minutes and 30 seconds, ending with a fist raised in the air.

Lee won his first Academy award in 2019 for the adapted screenplay of “BlacKkKlansman,” which also had nominations for best picture and best director. His film credits include “Do The Right Thing,” “She’s Gotta Have It,” “25th Hour” and “Malcom X.”