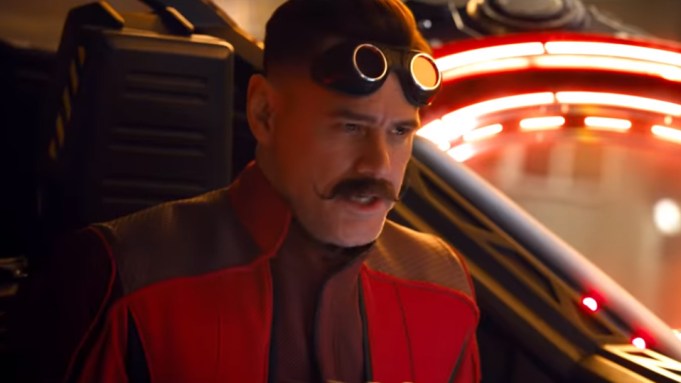 Jim Carrey, clad in a handlebar mustache and aviator goggles, goes head-to-head with Sega character Sonic as Dr. Robotnik in the latest trailer for “Sonic the Hedgehog.” With his animated acting style and comedic chops, the actor breathes life into the super-villain as he wreaks havoc on the town, the hedgehog and his own henchmen.

Based on the Sega video game franchise, the film follows Sonic as he attempts to understand life on Earth alongside his new friend Tom Wachowski (James Marsden). The duo is forced to work together in order to thwart the evil Robotnik’s (Carrey) plan to trap Sonic and use his powers for world domination. Ben Schwartz lends his voice as Sonic. Neal McDonough, Adam Pally, Tika Sumpter and Natasha Rothwell also star in the film.

Also featured in the commercial are athletes Michael Thomas, Allyson Felix, Christian McCaffrey and Kyle Busch, who all name Sonic the Hedgehog as the fastest and most famous speedster in history.

“I’ve raced the fastest in the world. He makes us all look slow,” Felix says as she takes off on the track.

After all four sports figures finish singing praises of the hedgehog, the commercial pans to Sonic in a director’s chair, begging for more compliments.

Paramount Pictures released a second official trailer last November after its first trailer was met with intense scrutiny, as fans criticized its take on Sonic’s character design, with many claiming that it looked a little too realistic. Director Jeff Fowler went back to the literal drawing board after that, debuting a new character design that was much better received by fans.