Sona Mohapatra, ‘Shut Up Sona’ Star, on Being a Feminist Voice in India’s Music Industry 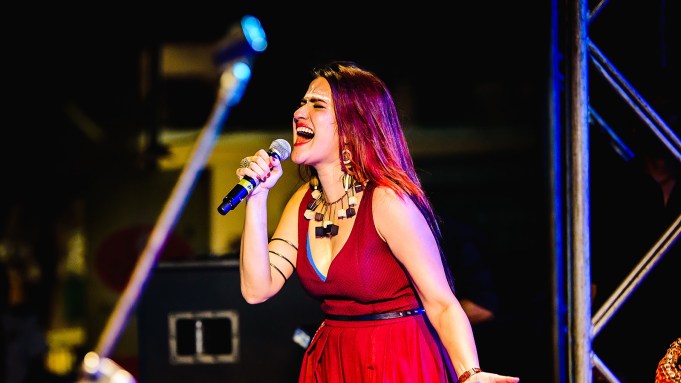 “Shut Up Sona” was originally conceived as a showcase of Indian singer Sona Mohapatra’s music and artistic heritage, but after three years of filming, Deepti Gupta’s film morphed into something more.

The 90-minute documentary is an empowering exploration of the singer’s pursuit of gender equality, across India and in the music industry, in the face of deep-rooted misogyny and religious adversity.

Mohapatra was born in Cuttack in the eastern Indian state of Odisha, in a culturally Hindu household where she grew up watching her working mother hold “the shorter end of the stick,” before heading off to university in Bhubaneswar to be confronted by even more inequality for women. After cutting her teeth in the world of jingle making, her solo music career kicked off in 2007 with the release of her debut album, “Sona,” where she was already speaking up about the barriers faced by women in an industry that continues to treat women as lesser.

Over a decade later, with a slew of hits to her name including “Rupaiya, Satyamev Jayate” and “I Hate You (Like I Love You),” Mohapatra is still trying to get fairer representation for female artists — especially at music festivals, where she is only offered headline spots if she shares billing with her composer husband Ram Sampath.

The documentary, which she executive produced, chronicles her struggle as well as the death threats, daily Internet trolling, and blasphemy lawsuits filed against the outspoken singer as she produces new music and tours the country she loves. Ahead of its premiere at the London Indian Film Festival this weekend, Mohapatra spoke with Variety about the making of the film, her career and the continued struggle to get the film shown in India.

“Shut Up Sona” really shows you’re a person who is not afraid to speak without a filter. Has that always been the case?

I am not bothered about being modest. I didn’t grow up with any academic understanding, or education, around this concept of feminism; I just inherently felt things had to be fairer. My mother was a working woman and it was just understood that she would not only take care of her three children and cook, [but also] take care of the in-laws, work and bring in the money. It just seemed overwhelmingly a misbalance. When I stepped out into the real world, every step of the way there was somebody telling me what not to do. The college I went to would make me feel conscious about the fact that I had breasts. I knew that was not okay and I was going to do my bit by speaking up. I feel very fortunate that being an artist and a mainstream success in my country I get to go on concert stages where 200,000 people show up. I craft opportunities to have a worthy conversation in the public domain because our country is young enough to listen in.

It’s clear you and your partner Ram have a great partnership borne of mutual respect and shared beliefs. Is that a bit of an anomaly?

I think in my bid to retain my independence, and many women go through this, you tend to push your partners hard and even punish them for the faults of the rest of the men. Yes, my partner is a fantastic guy and you see him in the film being very supportive, but in India, it’s almost like he’s doing me a favor by being such a nice guy. He’s exceptional in many ways, and I celebrate that, but I don’t have to keep reiterating it because I do equally that much for him. It’s so difficult for people to digest that. I hope there are many more men like him. It’s a problem in the world that he’s a rare one.

In the documentary, there’s a certain tone reserved for you by a lot of the men you encounter, one scene in particular with a male journalist.

This journalist with a television camera had circumvented the security, literally barged into my house to take this interview, and then, of course, he was acting atrociously because he wasn’t even focused. He was chewing gum, which to me is disrespectful, and staring at his phone. Many times during the pandemic I have had to have a conversation with some of the leading journalists on television and they speak condescendingly even without realizing it. They think I’m this pretty woman whom they can talk down to and get some gossip out of, but hopefully, [I can] give a much more balanced point of view.

You’re depicted as being a lone voice in this fight for equality — do you feel lonely?

I certainly do. I sometimes have felt deeply vulnerable and full of despair. No matter how harsh it might sound, even in our entertainment industry, women who are artists — whose success is vulnerable and don’t want it to go away — would rather I keep my mouth shut. Women in positions of power, even at streaming platforms, strong women who you would expect to empathize or understand a journey like mine, give me advice about how I’d be better off if I just focused on singing. I had one such woman, in fact, who recently got promoted, who said, “I watched your film but you should just focus on being such a wonderful artist. I’m telling you this as a friend.” I don’t need such friends.

The documentary isn’t just about your activism it also explores the rich history of music in your country and the poets who have inspired your work, like 16th-century Hindu mystic poet Meera. There are certainly comparisons to make.

My love for my country is very deep and it has this very rich history of music and musicianship and legendary poets like Meera. She has been a driving force in my life from my childhood, but she was always painted to be this domesticated woman sitting within the four walls and singing for Lord Krishna. But Meera was a very smart subversive artist. She lived in times where she couldn’t afford to be direct with what she had to say but she inserted so many empowering cues through her music. She was singing about a lot of the social evils that prevailed, especially against this concept of Sati when women had to kill themselves if their husbands died. She talked about adultery and wrote a lot of poetry, which expressed a lot of sensuality and I hear a lot of eroticism in it. When I started making the film, it was a journey of discovering the real Meera, among other things, because those are the stories that influence my storytelling on stage.

Why did you trust Deepti Gupta with your story?

Deepti Gupta is a very dear friend of mine. I’ve known her for more than 15 years, she is one of India’s first female DOPs and she has a very special way of shooting India, and I felt an immediate connection with her when I saw her work. I knew that she has gone through a similar journey of not really getting her due so I reached out to her to say, ‘Let’s make a film and not wait for somebody else to give us this opportunity,’ so to say, because they are just too far and few in between for women in the industry. And we’ve been on this journey for three years.

India’s film industry is world-renowned — what’s been the response at home?

The film has had a fabulous journey and we got a lot of applause and love at festivals, but as an Indian artist, I seek impact in my country the most. A lot of love comes my way from the youth in my country but the gatekeepers are sitting with their archaic view of my kind of woman being something they should be worried about. I have called out a lot of people within the industry, but it’s a small world and they would not want to piss off each other by entertaining my film. I do want Indians to be able to see my film; I get thousands of letters and messages asking, ‘Where can we watch, “Shut Up Sona” in India?’ but I don’t have an answer right now. The people making the decisions are not necessarily comfortable with what I have to say. I have to be patient.

Do you think if it was distributed on Amazon or Netflix it would force your industry to follow suit?

Absolutely. But our industry is not really an industry –– it’s seven or eight families that call the shots. The son of a famous star will become another star, and the producers, they all come from the same families. There are exceptions to that but our film industry is a boys club and the music industry is a men’s-only zone. All our superstars come from one gender, which is strange because the first big musician superstar in India at the turn of century, was a woman called Gauhar Jaan. So India comes from that background of having celebrated women artists, but now they make you a superstar on the basis of how sexy you are and how pretty you are, but if you have a personality and you’re a woman, you’re in trouble.

Do you plan on making more films?

You know, we shot a lot of wonderful performances at these big concerts and it didn’t end up in the final edit of the film because the narrative went another way altogether. So, my immediate thought was to shoot ‘Please Sing Sona’ but ever since this lockdown — and it’s been really serious in India — I’ve been dying to go back on stage, so I’m working on a brand new act. I can impact change in such a direct, powerful way within my country by touring and reaching out to so many youngsters. Six months ago, I was working on this bunch of projects, talking about web series, but I was born to perform on stage, and in the last few months, it’s made me think, ‘Why is it that we have such a powerful gift but always want more or something different?’ Maybe this should be good enough. So we’ve actually set up a studio here [in Goa] and we are working on my next album.

“Shut Up Sona” is playing as part of the London Indian Film Festival on Sept. 18 at BFI Southbank.