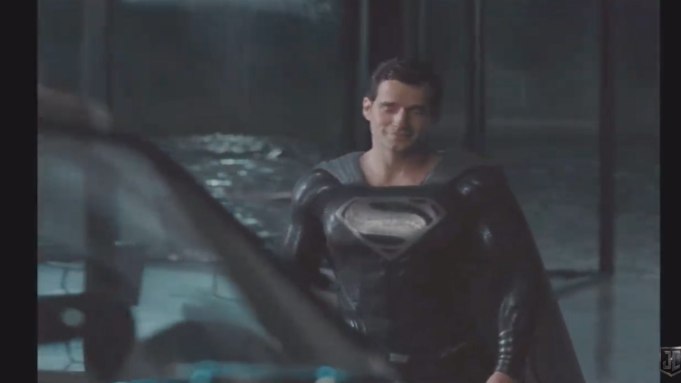 During JusticeCon’s “Spotlight on Zack Snyder” panel this afternoon, the director debuted a never-before-seen clip of the much-talked about “Justice League” Snyder Cut.

The under ten-second clip shows Henry Cavill’s Superman meeting Alfred Pennyworth (Jeremy Irons) after coming back from the dead, a scene not included in the 2017 “Justice League” film. “I’m assuming you’re Alfred,” Superman says after flying down to greet Alfred, who is working on his car. Superman is notably wearing his black suit, which was also not used in the previous version.

The preview highlights one of the major focuses of the Snyder cut, which is restoring the film’s intended aspect ratio of 1:4:3. During the panel, Snyder explained that in the original “Justice League,” many important aspects of scenes were actually cut out of the frame due to cropping.

Snyder teased that he is trying to secure the name “Zack Snyder’s Justice League” for the film, but is uncertain if it is possible due to legal reasons. Snyder also showcased new “Justice League” merch for fans to celebrate the release, with all proceeds going to suicide prevention.

Furthermore, Snyder confirmed that he will only be using the scenes he shot before leaving the film in the cut.

“There will be no chance on earth that I will use a shot prior or after I left the movie,” Snyder said. “I would destroy the movie, I would set it on fire before I would use a single frame that I did not photograph. That is a f—ing hard fact.”

Snyder has directed two films affiliated with DC Comics, “Man of Steel” in 2013 and “Batman v. Superman: Dawn of Justice” in 2016. He was set to helm 2017’s “Justice League” as well, but had to leave the project in the middle of production due to a family emergency. Joss Whedon stepped in to finish the film, but largely changed Snyder’s original vision, causing an outcry among fans for Snyder to release his own cut of the movie.

The Snyder Cut of “Justice League” is expected to release next year on HBO Max.