Premiering in Competition at Sitges, ‘A Perfect Enemy’ Gets International Trailer (EXCLUSIVE) 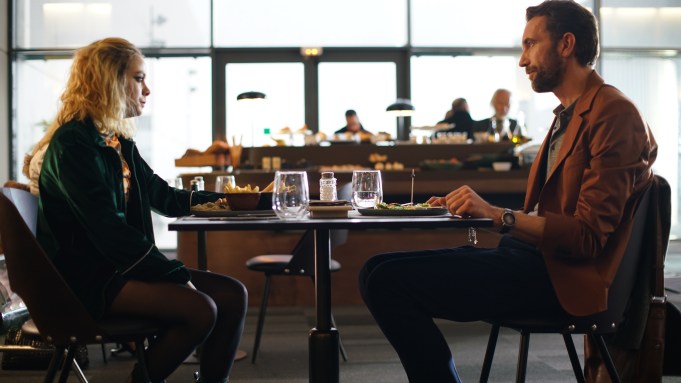 This week, Barcelona-based filmmaker Kike Maíllo’s “A Perfect Enemy” will world premiere at Catalonia’s Sitges Film Festival, playing in the event’s Official Fantastic Competition. Ahead of its Oct. 16 premiere, sales agent Pulsar Content has given Variety access to the film’s international trailer.

An adaptation of Amélie Nothomb’s bestselling novel “Cosmétique de l’Ennemi,” the film is the story of internationally renowned architect Jeremiasz Angust. While waiting in the Paris International Airport, he’s approached by a talkative young woman named Texel Textor who’s colorful and energetic look and demeanor are a complete mismatch with Angust’s own uptight garb and composure.

After Texel causes him to miss his flight, Angust is unable to shake the girl and what started as an amusing chat quickly becomes something far more malicious.

Maíllo, explains: “In an era when we are permanently exhibiting ourselves, in ‘A Perfect Enemy’ I wanted to talk about the monsters we keep in the closet. About the sins we try to hide from others and ourselves. Those faults that we sweep under the carpet hoping that no one will ever be able to uncover them.”

Maíllo’s solo directing breakout came in 2011 with his sci-fi feature debut “Eva,” which opened the 2011 Sitges Festival and, sold by Wild Bunch, was a The Weinstein Co. U.S. pick-up.

International sales for “A Perfect Enemy” are handled by Pulsar Content, a company headed by former Bac Film head of sales Gilles Sousa and Marie Garrett. XYZ represents the film in the U.S. market.

“We are thrilled to premiere ‘A Perfect Enemy’ in Sitges and can’t wait for audiences to discover this captivating thriller,” say Pulsar’s Sousa and Garret. “Amelie Nothomb’s book was smart, psychological and full of twists. It was challenging to adapt, and Kike delivered a powerful, intense and cinematic film that we’re really proud of.”

“We are grateful for our collaboration with Kike and his team, and what an honor to world premiere in competition at Sitges!” added the French producers from The Project. “The fact that Amélie liked this first film adaptation of her book so much sends a positive message to distributors and is a good omen for our film’s international career.”