Shirley MacLaine’s Secret to Her Longevity: ‘I’m Not a Diva’ 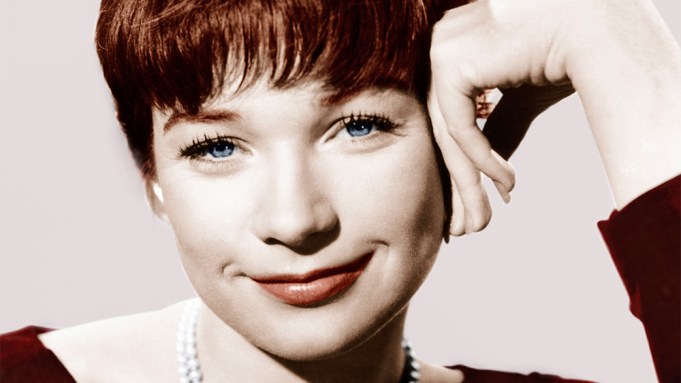 Shirley MacLaine was only 16 years old when she left Arlington, Va., and headed for Broadway. With a lifetime of dance classes behind her — her mom enrolled her in ballet when she was 3 to help strengthen her weak ankles — she landed a summer gig as a chorus girl in “Oklahoma!” She returned to her hometown to finish school, then made a beeline back to the Great White Way.

“Once I graduated from high school, there was no question what I was going to do,” MacLaine tells Variety from her ranch in Santa Fe, N.M.

Her life changed overnight when, as dancer in the original 1954 production of “The Pajama Game,” she replaced star Carol Haney after she sprained her ankle. A few months later, MacLaine was signed by Paramount Pictures.

In the more than six decades since, MacLaine has earned five Oscar nominations for acting, finally taking home the gold in 1984 for her work as Aurora Greenway in James L. Brooks’ “Terms of Endearment.” She also has five Golden Globes on her shelf as well as an Emmy and countless other awards and honors.

And never once has she slowed down. In fact, the 86-year-old legend has three films lined up when it’s safe for her to go back to work.

What’s the secret to your career longevity?

Even though I tell people the truth, I’m not a diva. That comes from my 3-year-old ballet training. I’ve got to go all the way back to that and just hard, honest work, with quite a bit of art, if you can muster it, thrown in. I’ve also stayed in the business and never thought about quitting because I wanted to pay for plane tickets to travel. I didn’t socialize Hollywood style. I’d rather travel to a country I hadn’t been to. So when I think about my life, I’m not sure I wouldn’t put the travels a bit above show business.

What did your parents think when you told them you were moving to New York?

They weren’t surprised. I was in show business since I was 3, basically.

But it does take a bit of self-confidence to move to New York right after high school.

I’ll tell you something, I’ve often meditated on that. They were so confident that I would be alright, that I became alright. It didn’t occur to me that I should have confidence. It does now. I look back on it now, and I think, “Oh, what were they thinking?” I had a certain amount of what I would call sophisticated naivete because I had been going to ballet school from 3 on, as I said. But when we lived in Arlington and Richmond, I was always on some bus by myself going to ballet class and learning to negotiate the transfers and learning to be alone and fairly confident that I would be fine, walking home in the forest alone at night. I had this kind of young trial of what life would be. I think when a young person isn’t afraid of negotiating things alone, I think that will shield a person, that little person, from any kind of problem.

When did you know you had made it?

The night I went on for Carol Haney. I think I was a bit of a metaphysician then and didn’t even realize it. But I knew I had some kind of angel on my shoulder when I was trying to get through the show that first night when the cast was lined up thinking, “What the fuck is she going to do?”

What did you think when you found out you were going on for her?

All I thought of was “I’m going to drop the hat in ‘Steam Heat.’” And I thought, “What shoes am I going to wear?” I knew Carol Haney’s feet were smaller than mine. I always thought about practical things at times like that.

What shoes did you wear?

They dyed the pair of sneakers I wore to the theater that night black. They were still running black dye when I went on. By the way, I did drop the hat in “Steam Heat,” and I said, “Shit,” very loud because I was not used to doing vaudeville tricks with a big spotlight in front of me.

What was it like receiving the applause that night?

We took the bow, and the audience stood up. And [MacLaine’s ‘Steam Heat’ partners] Buzz Miller and Peter Gennaro peeled away from me and left me in the middle of the stage, and I was overwhelmed with loneliness. I said to myself, “Am I ready for this?”

Your first film was Alfred Hitchcock’s 1955 “The Trouble With Harry.” What was he like as a director?

I always had a chorus girl attitude. He’s the director. He’s the boss. That’s what I had learned since I was 3, even though I had learned to defend whatever objection I had to whatever was going on. He wouldn’t eat a meal without me. I gained 25 pounds on that movie, and I got a call from Frank Freeman, who was the head of Paramount at the time, and he said, “Should we just tear up your contract? Are you going to stop eating?” I probably wasn’t aware or sophisticated enough to understand how good Hitch was, and that he was really doing this very, what do you call it, comedy. It was a very strange comedy, and I was just being myself.

Do you know why he wanted to eat with you all the time?

Well, I enjoyed it as much as he did. He would do pictures according to wherever the location was in the world, according to the restaurants in that location. And there was some very good restaurants in Vermont, because it was a destination place for the beautiful trees, and we were shooting in the fall. We would talk, and he would tell me stories, and he would get very sophisticatedly cynical. And I would think it was funny, and he would be glad that I got it.

When you were sitting there with Alfred Hitchcock, was a part of you at any point going, “Where am I?”

No, not at all. I wasn’t sophisticated enough. I was only 18. I was just glad to be in his company because he was so frigging amusing, and he loved to test everyone’s receptivity to his cynicism. I realize that now.

You did two movies with Billy Wilder: “The Apartment” in 1960 and “Irma la Douce” three years later. Did you like working with him?

I liked him, but I wouldn’t put him at the head of the line for women’s liberation.

Did you have chemistry with Jack Lemmon right away?

Oh, yeah. He was a great friend. He was the best. I didn’t drink – I’ve never drank that much — but I would play like I was drinking after the shoot every day. He was a real guy, a little bit like your best friend. I adored him.

You had a lot of male friends in Hollywood. Why do you think that was?

That’s another question I’ve asked myself about my past. I think I just am a hard worker. There was never any tension with me, because I was so sensible. It was very little sexual energy in those relationships. It was all very, “I’m your buddy. You can trust me. I will tell you the truth.”

When fans come up to you today, what movies do they mention most?

Usually “The Apartment” and then “Two Mules For Sister Sarah” and “Steel Magnolias.” “Terms of Endearment,” not so much.

Does that surprise you?

Yes, it does. But then “Terms of Endearment” was a Jim Brooks treatise on conflicting relationships. And I don’t know that people in this day and age would turn that on to feel better. You know?

What went through your mind when you heard Liza Minnelli say your name when you won your Oscar?

That I think I deserved it. I thought, “OK, this is going according to plan.”

Did you think you deserved to win for the other nominations?

What did it mean to finally win after four previous nominations?

Everything. It was wonderful. I’ve also eliminated several traffic tickets because they remembered that I won an Oscar. I was also a tough shoot, but I don’t want to talk about that part. But sometimes that kind of stress is what makes the artistic tension work.

I know you don’t want to talk about the tension on set, but you did say in your acceptance speech that you really wanted to work with Debra Winger.

Not after the movie.

Whenever I have to go to a hospital to visit someone who is sick, I always want to go up to the nurse’s station and start screaming, “Give them a shot.”

We did that in one take.

Yes. I think Jim couldn’t stand me screaming. But probably in that case, I just wanted to get it over with. You got to give the camera operator the credit for that scene, because he didn’t know where I was going, neither did I, or when I would stop at the nurses station.

Can we play a little word association?

Talent. He was born with it, but he was lonesome as a child and went to music as a best friend.

Learning. It happened to her young, and she’s spent her life learning.

Is there someone who you wanted to work with but never got the chance?

Brando, but I think I was more interested in what he would do off camera because he was so weird.