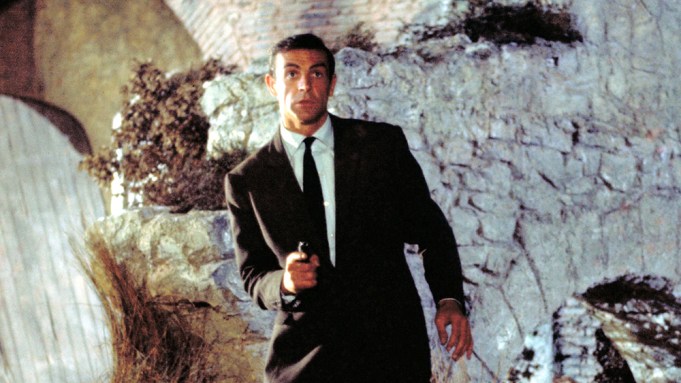 Sean Connery, who starred as the iconic James Bond and thrilled audiences in countless other memorable roles, has died at 90. Hollywood immediately started paying tribute to the silver screen legend, remembering him for Bond as well as his other iconic roles and effortless cool.

Bond producers Michael G. Wilson and Barbara Broccoli wrote via Twitter that, “We are devastated by the news of the passing of Sir Sean Connery. He was and shall always be remembered as the original James Bond whose indelible entrance into cinema history began when he announced those unforgettable words — ‘The name’s Bond… James Bond’ — he revolutionized the world with his gritty and witty portrayal of the sexy and charismatic secret agent. He is undoubtedly largely responsible for the success of the film series and we shall be forever grateful to him.”

“The name’s Bond… James Bond” — he revolutionised the world with his gritty and witty portrayal of the sexy and charismatic secret agent. He is undoubtedly largely responsible for the success of the film series and we shall be forever grateful to him.”

The family of Sir Roger Moore, who died in 2017 and played Bond in seven films from 1973-1985, made a statement on his Twitter account. “How infinitely sad to hear the news Sir Sean Connery has passed away,” the tweet says. “He and Roger were friends for many decades and Roger always maintained Sean was the best ever James Bond.”

How infinitely sad to hear the news Sir Sean Connery has passed away. He and Roger were friends for many decades and Roger always maintained Sean was the best ever James Bond. RIP

George Lucas, who created the “Indiana Jones” franchise, wrote: “Sir Sean Connery, through his talent and drive, left an indelible mark in cinematic history. His audiences spanned generations, each with favorite roles he played. He will always hold a special place in my heart as Indy’s dad. With an air of intelligent authority and sly sense of comedic mischief, only someone like Sean Connery could render Indiana Jones immediately into boyish regret or relief through a stern fatherly chiding or rejoiceful hug. I’m thankful for having had the good fortune to have known and worked with him. My thoughts are with his family.”

Mike Myers, who parodied the James Bond franchise with his popular Austin Powers persona, said “I loved Sean Connery as did my British father. A great actor. A legend,” in a statement to Variety.

Sam Neill, who starred with Connery “The Hunt for Red October,” tweeted, “Every day on set with Sean Connery was an object lesson in how to act on screen. But all that charisma and power- that was utterly unique to Sean. RIP that great man, that great actor.”

Every day on set with #SeanConnery was an object lesson in how to act on screen. But all that charisma and power- that was utterly unique to Sean . RIP that great man , that great actor . https://t.co/W8MQrFYlJ0

Robert De Niro, who starred in “The Untouchables” with Connery, told Variety: “I’m very sorry to hear about Sean’s passing. He seemed much younger than 90; I expected – and hoped– he’d be with us much longer. See you up there, Sean.”

Hugh Jackman wrote, “I grew up idolizing Sean Connery. A legend on screen, and off. Rest In Peace.”

I grew up idolizing #SeanConnery. A legend on screen, and off. Rest In Peace. pic.twitter.com/OU9QEy5fTB

Nicolas Cage, who acted alongside Connery in “The Rock,” said: “I admired Sean so much. I was happiest when I was working with him – his wisdom, humbleness, and extreme honesty has guided me ever since I met him. He was my friend and greatest teacher in cinema. The first movie star to lead the way in combining drama, action adventure and comedy. He did it all effortlessly and with dignity. Maestro, you will be missed.”

Author Stephen King chimed in, writing, “Sean Connery in his first starring role, as a washed-up boxer. He was a fine actor and by most accounts a good guy.”

Sean Connery in his first starring role, as a washed-up boxer. He was a fine actor and by most accounts a good guy. pic.twitter.com/q1kmxUrFGC

Paul Feig wrote, “Few were cooler, few more suave, few more effortless. He showed us all how it could be done and he thrilled and entertained us the entire time. RIP Sir Sean Connery.”

Few were cooler, few more suave, few more effortless. He showed us all how it could be done and he thrilled and entertained us the entire time. RIP Sir Sean Connery. https://t.co/hyyw52ZMa2

Kevin Smith wrote, “He was my Dad’s James Bond, so Dad supported Mr. Connery’s career his entire life, always taking me to see any movie his fave actor was in. I have sweet memories of watching Dad watch his movie idol. So Sean Connery’s passing also feels like I’m losing Dad again. RIP, Dr. Jones.”

He was my Dad’s James Bond, so Dad supported Mr. Connery’s career his entire life, always taking me to see any movie his fave actor was in. I have sweet memories of watching Dad watch his movie idol. So Sean Connery’s passing also feels like I’m losing Dad again. RIP, Dr. Jones. pic.twitter.com/8ElVyac1kV

Tony Rothman, chairman of Sony’s Motion Picture Group, tells Variety, “Like others of my generation, I didn’t admire Sean Connery, I worshiped him. Getting to work with him as both a producer and an actor was a singular high point of my entire career. He taught me so much. The Class Act room in heaven has a new lead. And note to all up there: if you are on time for a meeting with the incomparable, unimaginably cool, mega talented Sir Sean, you are five minutes late.”

Alec Baldwin wrote to Rolling Stone, “He’d give me advice, but he’d never push anything on me. He asked me ‘Are you going to the rushes, boy? The dailies — are you going to go see them?’ I told him, ‘Well, no, I wasn’t planning on going.’ ‘Oh, you must! You must go to the rushes, boy! How will you ever learn?!’ And I just thought, wow. You know, he wasn’t chatty — he was there to work. But he was happy to help you get the job done. He’d been through what I was going through. … Sean was always the most impressive combination of actor and star that I’ve ever seen.”

“Marnie” co-star Tippi Hedren tells Variety, “I feel so fortunate to have worked with Sean. I am just so grateful to have had the honor of knowing him as a dear friend. He was a fabulous man and so very talented. He had a great sense of humor and he made our job fun. An elegant man, a brilliant actor and an over all amazing individual. … Not to mention extremely attractive.”

Darrell Hammond, who played Connery many times on “Saturday Night Live,” told Variety: “Doing an impression of Sean Connery for so many years on SNL was a pure joy for me. It’s by far one of the most popular impressions I’ve ever done and I’m forever grateful to him for that! My sincere condolences to his family, he was a tremendous talent that will definitely be missed.”

Sorry to hear of the passing of #SeanConnery, my condolences to his family. Always loved doing my silly impressions of him, RIP 🙏🏻

“Mr Connery you wear me out!“
“You didn’t say that last night when I was pumping moo goo gai pan all over your tonsils!”pic.twitter.com/v1lUYS0MFV

“Requiem for a Heavyweight” director Alvin Rakoff tells Variety, “He had striking presence. He had presence as his best quality. You were very aware of him being there when he was there. He was striking looking. He was tall, handsome. He became such a big star, but we lost touch fairly quickly, much to my regret. Through the years I saw him from time to time, but we never really got together properly after that.”

“The Man Who Would Be King” co-star Michael Caine tells Variety, “Sean was a rare combination of being great star and a brilliant actor. He proved this first in James Bond. The second he proved when we both were in “The Man Who Would Be King,” we’ve had a great time together. I haven’t seen him for quite a long time and I’ve missed him, but today, I really miss him. I am grateful for the time we spent together. A wonderful man.”

Damn,We Just Lost ANOTHER Great-SEAN CONNERY/The Original JAMES BOND-007. Some Of Earliest Memories Of My Late Mother (Jacqueline Shelton Lee) Taking Me To The Movies Was James Bond Joints. Several Times Moms Would Have To Cover My Eyes. I Also Asked “Mommy,Why Is That Lady Names Pussy Galore❓ 😳😳😳I Got A “Shhhhhhhh,Be Quiet And Watch The Movie”. HA HA😜😜😜😜. No Disrespect To The Other Actors Who Later Played 007,But To Me Sean Is My Guy,He Was Kicking Much Ass And Taking Names,All Da Fine Ladies, Kraft Gadgets,And Had JOKES TOO😜😜😜😜. Rest In Peace. 🙏🏿🙏🏿🙏🏿🙏🏿🙏🏿🙏🏿🙏🏿🙏🏿🙏🏿💜💜💜💜💜💜💜💜💜💜💜

It saddens me that today the legendary Sean Connery passed away. At least he lived to be 90. My heart goes out to his close ones. May he rest in peace 🙏🏻 Me da tristeza que el legendario #seanconnery a fallecido hoy. Por lo menos vivió hasta los 90. 🙏🏻

It says something for the extraordinary charisma of this Edinburgh lad to have created the most iconic character in film & then, rather than be typecast by it, become equally famous for just being Sean Connery. A real screen legend; oft imitated (by all!) but never equalled. 1/4 pic.twitter.com/TOdAI0Fxnv

Sean Connery was a movie legend, even far into his golden years. Our strongest Bonds were formed by him, and he was Untouchable. He passed today at age 90, a suave hero to the end.

RIP Sean Connery… the only Bond. From Scotland with Love and a broken heart 🏴󠁧󠁢󠁳󠁣󠁴󠁿💔 https://t.co/jfMVXp0o8u

RIP Sir Sean Connery.. a trailblazer, a true legend and a gentleman https://t.co/hkLwouejZI

Sean Connery was a legend, one of the greatest actors of all time. He provided endless entertainment for all of us & inspiration for me. I’m not just saying that because he was a bodybuilder who placed in the Mr. Universe contest! He was an icon. My thoughts are with his family.

Saddened by the news of the passing of Sir Sean Connery. A wonderful man who I had the pleasure of working with in Time Bandits. We crossed paths many times over the years. Such immense talent and a vibrant human. And the only one of us to find The Holy Grail. pic.twitter.com/sNo4NtB6af

He taught me so much. Sean the legend. To me, and so many others. My very first line of direction I was actually afraid to ask…“Sean can you please say that less charming”. He said, “sure boy”. That’s what he called me the whole movie, ‘boy’. I was just a kid, directing him in ‘The Rock’. Sean, you taught me more then you will ever know. To this day, you gruffly taking me under your wing Is still in everything I do. Rest In Peace my friend. @seanconnery_official @seanconnerydaily

Farewell my friend. I love you Sean Connery with all my heart. Until we meet again, I will cherish every moment I shared with you. My love to Micheline and the family. Love “ the kid”

He set the bar high with his portrayal of #JamesBond. A legend on and off-screen. RIP Sir #SeanConnery. Thank you for all your films. pic.twitter.com/UE5t7EEOyr

Variety will update this post as more tributes come in.