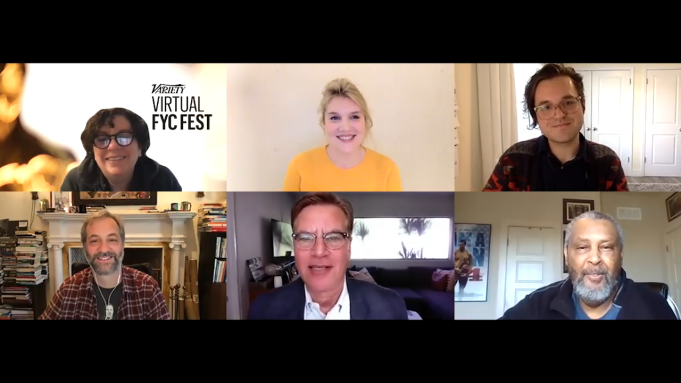 When filmmakers gather these days, the conversation tends to turn to how the coronavirus pandemic has decimated movie theaters — as well as to the related topic of Warner Bros.’ bombshell decision to stream its entire 2021 slate on HBO Max the same day they’re to be released theatrically. During a panel among screenwriters for Variety‘s inaugural FYC Fest, Judd Apatow (Universal’s “The King of Staten Island”), Aaron Sorkin (Netflix’s “The Trial of the Chicago 7”), Emerald Fennell (Focus Features’ “Promising Young Woman”), Kevin Willmott (Netflix’s “Da 5 Bloods”) and Andy Siara (Hulu’s “Palm Springs”) discussed those subjects and much more.

Apatow detailed how Universal, in partnership with him, decided during the spring that his movie with Pete Davidson, “The King of Staten Island” — which was supposed to be a theatrical summer comedy — would instead go exclusively to premium video-on-demand. Apatow said he wanted the film out there during the pandemic, given that it revolves around the lives of firefighters and nurses. “The only thing I really have to give to the human race is something pleasant at a time like this that might make you feel happy and appreciate the people that are risking their lives for you,” he said.

When it became clear that movie theaters weren’t going to be open in most places anytime soon, Apatow said that he and Universal had a “very respectful conversation about how to get the movie out there.” He noted that in sharp contrast to how Warner Bros. appears to have handled sending its movies scheduled for next year to HBO Max. “It’s somewhat shocking that a studio for their entire slate could call what appears to be nobody,” Apatow said. “It’s the type of disrespect that you hear about in the history of show business. But to do that to just every single person that you work with is really somewhat stunning.”

Indeed, the strategy has infuriated filmmakers such as Christopher Nolan and Denis Villeneuve, as well as agencies and the Directors Guild of America.

The movies of four of the five screenwriters on the panel have already premiered on streaming services or VOD (Fennell’s “Promising Young Woman” will open in theaters, such as they are, on Dec. 25, and will hit PVOD three weeks later). The panelists appreciate streaming services as an innovation, not only as creative outlets, but these days as a matter of safety as well. Sorkin had originally made “Chicago 7” for Paramount Pictures, but the studio sold the film to Netflix — which he endorsed — so it could be released before the presidential election. “Having Netflix come along was like having a lifeboat come along that has luxury cabins and a buffet,” he said. “It was an incredible gift.”

And Siara, whose “Palm Springs” had in January broken the sales record for acquisitions at the Sundance Film Festival, said, the “marriage of two very forward-thinking companies, like Hulu and Neon together,” meant that “they knew what to do with this movie” when theaters were closed.

Yet they all bemoaned the endangered future of theaters, but predicted — or hoped, rather — that people will want to return to movies in theaters once it’s safe to do so. “There’s the big screen and there’s the sound — but the real thing that you miss about theaters is an audience, that shared experience,” Sorkin said. “It’s simply a different experience, and it’s an experience you want, and I believe that nothing can replace that and that people will go back to the movies.”

“Does anyone agree with me?” Sorkin asked.

“I agree!” Apatow answered. “I think people are going to go more than ever, because they’re so sick of their homes and their families. They’ll go with other people — not their families.”

Willmott won the 2019 Academy Award for adapted screenplay for Spike Lee’s “BlacKkKlansman,” and reunited with Lee for to write “Da 5 Bloods.” Even though “Da 5 Bloods” was a Netflix movie, Willmott said that the test screenings had been done in theaters, and he had attended a few of them.

“Theaters are a holy place,” he said. “They’re a special place where Americans come together to have this shared, common experience, and if for some reason that would go away, that would be a huge detriment to American society.

Fennell, whose “Promising Young Woman” had an explosive premiere at Sundance, said she worries about how the movie will be received by viewers watching it at home. “The thing about ‘Promising Young Woman’ is that on the face of it, it seems like quite a serious, dour movie — but actually, more than anything, it’s a comedy.”

She continued: “So much of it is about having permission to laugh. We found so much in the few screenings we did that the moment that one person kind of started laughing, everyone realized, ‘Oh, shit, OK — we can laugh at this stuff. Good, I wasn’t sure.’”

Fennell also weighed in on the Warner Bros. controversy. “To just not be told, to not be in the conversation, is peculiar, and it seems kind of deeply short-sighted. My main concern is that we’re all just getting so used to watching stuff at home, and I hope — I really do hope — that we all do desperately run back to the theaters.”

In the broader discussion, Siara described the all-night bidding war for “Palm Springs,” Sorkin talked about how he found real-life events that unfolded as he was editing “Chicago 7” to be “chilling,” and Willmott delved into how he and Lee wanted to illustrate the bond among Black soldiers during the Vietnam war, and how they felt “divided loyalties.”

For the whole conversation, including where they’re finding inspiration these days, and Sorkin’s prediction that “screenwriters, television writers and playwrights are going to write a lot about these last few years” under Donald Trump, watch the full video.