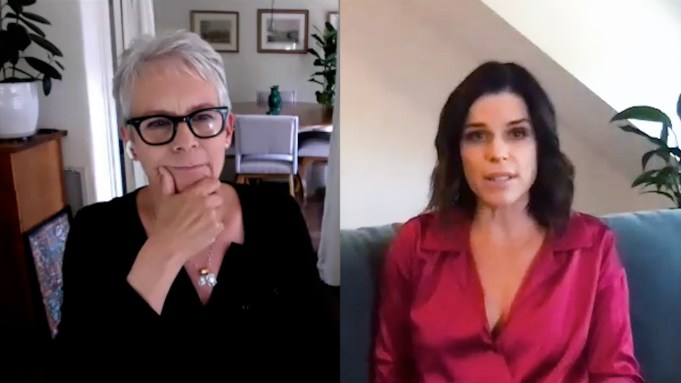 Sidney Prescott, Woodsboro’s reigning champ, is returning to the “Scream” franchise for a fifth installment. But how did the new directors, Matt Bettinelli-Olpin and Tyler Gillett, convince Neve Campbell to return without the heart and soul of the operation, beloved creator Wes Craven?

The death of Craven back in 2015 was mourned across the horror industry. His vision helped launch genre staples such as “The Hills Have Eyes,” “Vampire in Brooklyn,” “The Last House on the Left” and the massive “Nightmare on Elm Street” franchise. The director was known for his irreverent take on horror and the way he lovingly skewered the genre itself (along with its critics and fans). The high-water mark of this trademark impudence was “Scream.” Written by Kevin Williamson, the “Scream” franchise is considered essential movie-watching every spooky season.

So when Craven died, many believed the franchise was over, including the star, Campbell.

“I had been really apprehensive about doing another one,” Campbell told Jamie Lee Curtis in Variety’s special “House of Horror” conversation. “People had asked in the past whether I would do another one without Wes or whether I would make another one. I always felt like it’d be too difficult to do it without Wes. He was the master of these films. He did such a beautiful job on them. We were a family.”

But after some time had passed, a new set of directors stepped up to the plate. Bettinelli-Olpin and Gillett debuted their own staple of cheeky sinfulness via the critically adored “Ready or Not.” Could this pair successfully revive “Scream,” and would Campbell go for it? To find out, the duo penned the actor a heartfelt letter laying out their intentions.

“That meant a lot. That letter meant a lot to me. Then I went and watched one their films and it’s brilliant and in keeping in tone. So I thought, ‘You know what, I can do this.’ I think this could be a lot of fun and a good idea. These are people who are doing it for the love of these films. So that meant something.”

The note worked, and Campbell agreed to revive Prescott almost 25 years since the debut of of the first film in 1996.