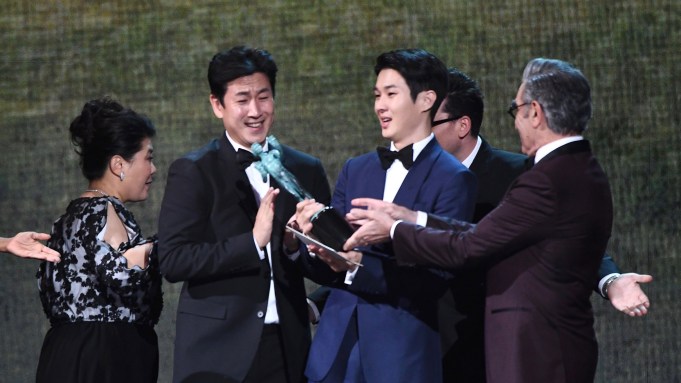 “The Crown’s” victory came in a season of major changes for the insider look at the House of Windsor, one that ushered in an entirely new cast of performers, as Queen Elizabeth II entered middle age on screen.

“Mrs. Maisel,” the story of a barrier-breaking female stand-up in the 1960s, faced headwinds of its own on the path to victory. It triumphed over the heavily favored “Fleabag.” “I voted for ‘Fleabag,'” Alex Borstein, one of the cast members, said during her speech. “This is really weird. This makes no sense…’Fleabag’ is brilliant.”

“Parasite,” a twisty South Korean thriller, has become a box office phenomenon, grossing nearly $140 million globally. One of its key awards season competitors, “1917,” was not up for an ensemble prize. It earned a Producers Guild Award on Saturday.

Unlike the Oscars, the Screen Actors Guild Awards honor both film and television and are voted on by members of the main acting union.

“Joker’s” Joaquin Phoenix was named best actor in a leading role, becoming one of the rare performers honored for a comic book movie. In a magnanimous speech, Phoenix praised the work of his rival nominees, as well as of another performer who had put his indelible stamp on the Joker in “The Dark Knight.”

“Judy’s” Renee Zellweger won best actress for her transformative performance as Judy Garland — a role in which she not only captured the star’s final years, but also sang many of her iconic torch songs. “I feel so lucky to be a member of this family of storytellers, who gets to do work that reflects the experience of being human and fosters understanding, and empathy and unity, and, with some luck, maybe pushes history a little bit closer to the light,” said Zellweger.

Tony Shalhoub earned a best male actor in a comedy statue for his work as the harried father on “The Marvelous Mrs. Maisel.” Shalhoub dedicated his award to Brian Tarantina, a “Mrs. Maisel” cast member who died of a drug overdose in November. “Our brother, here’s to you,” he said.

“Thank you for being so supportive of our show on these shores,” said Waller Bridge, adding, “This whole thing really has been a dream and if I wake up tomorrow and discover it was just that, then thank you, it’s been the most beautiful dream.”

“The Morning Show’s” Jennifer Aniston earned the award for best actress in a TV drama for her performance as the host of a popular morning TV broadcast. The show is one of the first programs to debut on Apple’s new streaming service. She took her moment at the podium to give a shout-out to Adam Sandler, who failed to earn either a SAG or Oscar nomination for his acclaimed turn in “Uncut Gems.” “Game of Thrones'” Peter Dinklage was named best actor in a TV drama for his work as Tyrion Lannister, the hard-drinking and shrewd counselor to monarchs. The HBO series was a ratings sensation, but its final season was divisive with critics and fans.

Brad Pitt was named best supporting actor for his portrayal of a washed-up stuntman in “Once Upon a Time in Hollywood.” “I’ve got to add this to my Tinder profile,” Pitt joked, in a speech that leaned into the humor. He went on to poke fun at director Quentin Tarantino’s penchant for shooting actresses barefoot. “Quentin has separated more women from their shoes than the TSA,” he said.

“Marriage Story’s” Laura Dern won best supporting actress for her turn as a canny divorce attorney. In an emotional speech, Dern thanked her parents, the acclaimed performers Bruce Dern and Diane Ladd. “I literally would not be here were it not for actors,” said Dern.

This year’s broadcast had its share of politically charged moments. Lifetime achievement award recipient Robert De Niro, a fierce critic of Donald Trump, said he would continue to speak out despite the backlash it sometimes inspires.

“There’s right and there’s wrong and there’s common sense and there’s abuse of power and as a citizen, I have as much right as anybody — an actor, an athlete, a musician, anybody else — to voice my opinion,” he said. “And if I have a bigger voice because of my situation, I’m going to use it whenever I see a blatant abuse of power.”

SAG-AFTRA President Gabrielle Carteris also alluded to the polarization roiling the country in her welcome remarks.

“We must recognize as a community and a country how important it is to listen to each other and to speak our truths not only in our stories, but in our lives,” she said, adding, “Art is magic. Art is power. And the magic and power of what we do together can and will shape a better future.”

The awards are seen as an important precursor to the Oscars. There tends to be greater overlap between the union and the members of the Academy of Motion Picture Arts and Sciences, the organization behind the Academy Awards, than there is with other awards shows. However, in 2019, the guild deviated from the Oscars in several key categories. SAG winners Rami Malek (“Bohemian Rhapsody”) and Mahershala Ali (“Greenbook”) earned the Academy Awards for best actor and best supporting actor, respectively. SAG best actress winner Glenn Close (“The Wife”) and best supporting actress winner Emily Blunt (“A Quiet Place”) were not as lucky. Olivia Colman (“The Favourite”) picked up the Oscar for best actress while Regina King (“If Beale Street Could Talk”) was named best supporting actress.

Some of the most intense drama took place before the telecast. De Niro was initially barred from entering the Shrine Auditorium. He forgot his ticket on the floor of his limousine. After security asked him a few questions, he was eventually allowed to take his seat.

The glitzy affair attempted to see how well actors take direction. At one point during a commercial break, a voice over the loud speaker in the ballroom admonished attendees to keep things crisp and to the point while picking up their statues. “If you are a winner, please get to the stage as quickly as possible, and keep your acceptance speeches brief,” the voiceover instructed.

Perhaps it worked. The SAG Awards clocked in at just over two hours — at least an hour shorter than the Globes or the Oscars typically run.