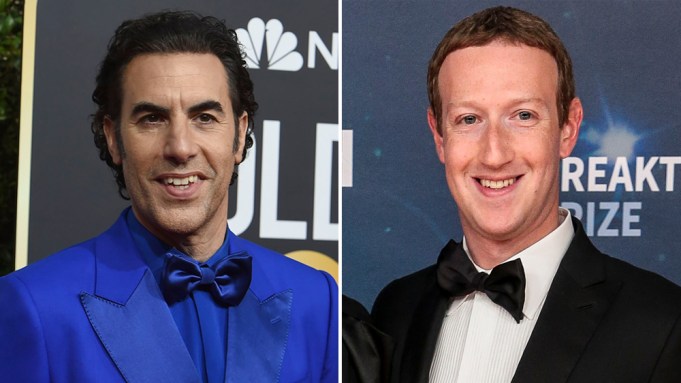 While introducing “Jojo Rabbit” at the Golden Globes, Sacha Baron Cohen made fun of Facebook creator Mark Zuckerberg, comparing him to a character in the Nazi parody film.

“The hero of this next movie is a naive misguided child who spreads Nazi propaganda and only has imaginary friends. His name is Mark Zuckerberg. Sorry, this is an old intro for the ‘The Social Network,'” he said.

The “Who Is America?” and “The Spy” star has spoken out publicly about his dislike of Zuckerberg before, previously at the Anti-Defamation League summit in New York in a speech that went viral.

“All this hate and violence is being facilitated by a handful of Internet companies that amount to the greatest propaganda machine in history,” he said at the time.

“Zuckerberg claimed that new limits on social media would ‘pull back on free expression.’ This is utter nonsense. If a neo-Nazi comes goose-stepping into a restaurant and starts threatening other customers and saying he wants to kill Jews, would the restaurant owner be required to serve him an elegant eight-course meal? Of course not. The restaurant owner has every legal right, and, indeed, a moral obligation, to kick the Nazi out. So do Internet companies,” he wrote.

Cohen’s role in “The Spy” was nominated for best performance by an actor in a limited series or motion picture made for TV alongside Christopher Abbott (“Catch-22”), Russell Crowe (“The Loudest Voice”), Jared Harris (“Chernobyl”) and Sam Rockwell (“Fosse/Verdon”). Crowe went on to win the category.