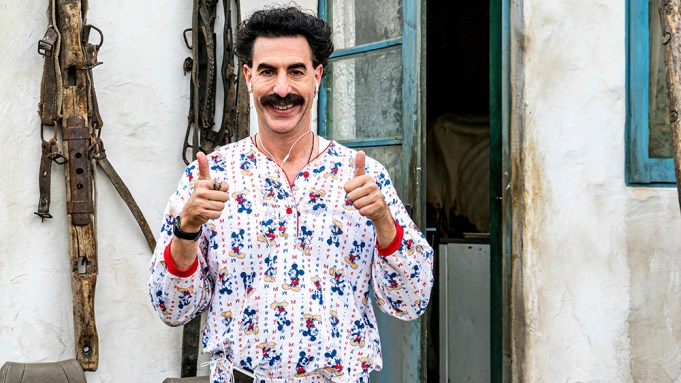 Sacha Baron Cohen’s Borat character is making a satirical pre-election pitch to female voters, asking them not to vote in the presidential election.

In a video posted Monday to Borat’s Twitter account, he said, “This is important message. Women — do not vote tomorrow. We hear if you do then glorious Premier Trump will lose. This is because like moths into a fire, you ladies are attracted by dangerous ideas like honesty, fairness and consent.”

“Do not believe the Democrat lies that Premier Trump do not like women. He really like them. 26 accusers cannot all be lying. He value ladies very much — up to $180,000 if they really pretty,” Borat continues. “If he stay in power and out of jail, similar monies could be going to you. This called Trump’s trickle down economy. Premier Trump very pro-women as he has made clear — your body, his choice. Women of US and A. This is the most important election of our lifetime. So leave it to the men.”

Last month, Trump was accused of another 26 incidents of “unwanted sexual contact” in the book “All the President’s Women: Donald Trump and the Making of a Predator” by Barry Levine and Monique El-Faizy.

Posing as a TV journalist, the 24-year-old actor invites Giuliani for a fawning interview for a made-up conservative news program. During their encounter, the attorney drinks Scotch, ignores social distancing measures and tells Bakalova that Trump responses in the spring saved “a million” American lives from coronavirus outbreaks.

Watch the full video below.