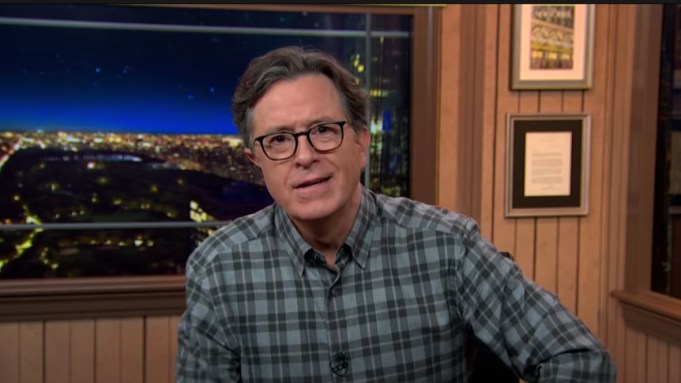 The Late Show With Stephen Colbert/YouTube

“The Late Show With Stephen Colbert” opened its show skewering Giuliani’s scene, in which it appears he reaches into his pants in a hotel bed while talking with actor Maria Bakalova, who plays Borat’s daughter in the comedy. Bakalova, who is 24, posed as a TV journalist interviewing Giuliani for a conservative news program and invites him to her hotel room for drinks. While Giuliani is fiddling with his pants, Borat runs into the room, saying “She’s 15. She’s too old for you.”

“Every four years, around this time of the election, people start to worry about an October surprise. Today, we got more than October surprised. We got October appalled, courtesy of Trump’s personal lawyer and man who has to constantly gnaw on a tree trunk to keep his teeth from growing through his bottom lip, Rudy Giuliani,” Colbert said in his monologue.

Colbert added that Cohen will be his talk show guest on Monday night, where he will likely discuss the viral Giuliani scene.

“Never a great sign when the moral authority in a situation comes from a guy who once handed a woman a bag of his own poop,” Colbert said, referencing a scene in the original “Borat” movie. “Even before cocktails in the bedroom, Rudy acted like a real jerk-off.”

The former New York City mayor and President Trump’s current attorney claimed he was “tucking in [his] shirt after taking off the recording equipment” in a series of tweets on Wednesday night. He called the video a “complete fabrication” and that Cohen would be a “stone-cold liar” if he alleged that Giuliani acted inappropriately.

“I would buy that, but I watched the footage,” Colbert said. “Why did you go into a bedroom at the suggestion of a young woman to have cocktails to take off a mic? I take off a mic every night. Never once have I reclined on a king-sized bed and then launched a fact-finding mission to my own groin.”