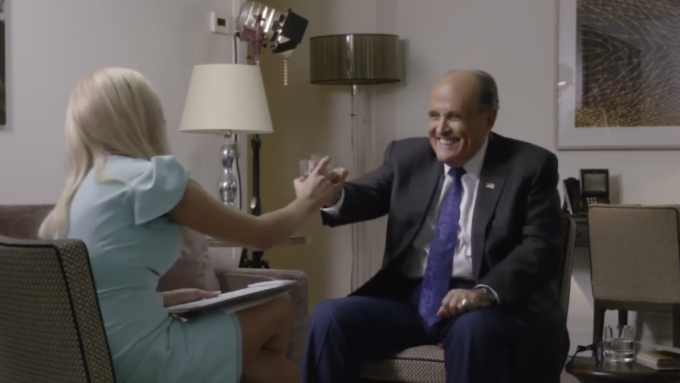 In a scene from the film (out this Friday on Amazon), Giuliani is tricked into entering the bedroom of a hotel suite by Maria Bakalova, portraying Borat’s daughter. Posing as a TV journalist, the 24-year old actor invites Giuliani for a fawning interview for a made-up conservative news program. During their encounter, the attorney drinks Scotch and ignores social distancing measures. At one point, he even tells Bakalova that the president’s speedy responses in the spring saved American lives from coronavirus outbreaks. “I’d say he saved a million lives,” Giuliani says before coughing.

Under the guise of a mic operator, Borat comes in and adjusts Giuliani’s mic and asks, “Is she asking too many questions?”

The pair retreat, at her suggestion, for a drink to a bedroom that is equipped with concealed cameras capturing the attorney’s every move. After she removes his microphone, Giuliani says, “You can give me your phone number and address.” He is then seen lying back on the bed, fiddling with his shirt before reaching into his trousers. He is interrupted by Borat who runs into the room and says: “She’s 15. She’s too old for you.”

Giuliani tweeted Wednesday that he was tucking in his shirt and that the video is “a complete fabrication.”

Josh Gad responded to the controversial scene via Twitter, saying it is “worse than you think.” “Having seen ‘Borat 2,’ I can now safely tell you #RudyGiuliani is over in a very big way,” he wrote. “It’s worse than you think and more uncomfortable than anything I’ve seen in a recent film, documentary or otherwise.”

Well, looks like the cat’s out of the pants. Having seen #Borat2  I can now safely tell you #RudyGiuliani is over in a very big way. It’s worse than you think and more uncomfortable than anything I’ve seen in a recent film, documentary or otherwise.

“Borat Subsequent Movie Film,” which concludes with an encouragement to viewers to vote, will be released on Friday on Amazon Prime Video, with a preview watch party Thursday night at the same time as the Presidential debate.