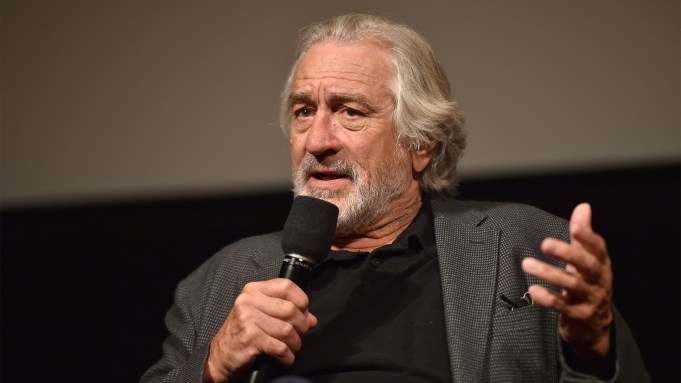 If there ends up being a movie made about the coronavirus pandemic, Robert De Niro wants to portray New York Gov. Andrew Cuomo.

In an appearance on “The Late Show with Stephen Colbert,” De Niro expressed his reverence for Cuomo and offered to take on the role in a hypothetical film about the current global health crisis.

“I guess I’ll play Cuomo,” De Niro suggested. “He’s doing what a President should do.”

Later in the segment, De Niro referred to President Donald Trump as “the idiot” and said he will support the presumptive Democratic nominee Joe Biden for the upcoming 2020 election.

“We, of course, could have survived this [pandemic] much better if the idiot had done the right thing, listened and heeded all the warnings,” De Niro said. “There were many, many warnings, and we are all paying for it now. It would have been bad in some ways, but never like this.”

De Niro went on to say that he could see Cuomo running for president, saying that he could see a President Cuomo in the future as his handling of the crisis has surpassed what Trump has done in office to combat the deadly virus.

De Niro, who has vehemently criticized Trump for his presidential actions, proceeded to attack Republicans as “enablers,” comparing the administration to a Shakespearean tragedy.

“It’s crazy, I have no words for it any more and what’s scarier about it all is that the Republicans and his enablers around him are not doing anything,” he said. “They are around a crazy person and they don’t do anything. They are not standing up to him.

He added, “No one has the balls to stand up to this guy. They all have a platform, they’re just not doing anything. What could be worth it for them, to sacrifice their souls to make this deal with the devil to work with this guy?”

In a recent interview with Variety, De Niro slammed the current administration, saying that Trump had the opportunity to stop the crisis, but didn’t.

“The whole thing is unimaginable,” De Niro said. “This administration made everybody suffer so needlessly. What the president has done is beyond infuriating. He could have stopped this and he didn’t, and he doesn’t show any empathy for people. Every day, he demonstrates his ineptitude and idiocy. I can’t wait until Election Day.”