Regina King, ‘One Night in Miami’ Stars on Bringing History to the Present and New Oscars Inclusion Guidelines 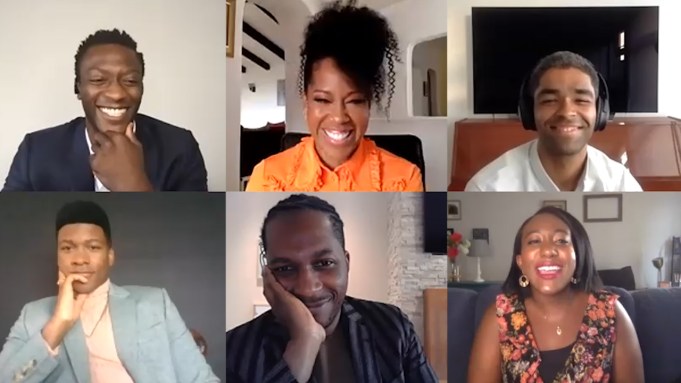 Regina King is not only bringing history to life with her film “One Night in Miami,” she’s making history of her own.

After becoming the first Black female director to have a film at the Venice Film Festival, King and her cast reunited at the Toronto International Film Festival to celebrate the movie’s early positive reviews. Joining the Variety Virtual Studio at the festival, King and the film’s stars, Kingsley Ben-Adir, Eli Goree, Aldis Hodge and Leslie Odom Jr., shared how they captured the essence of Malcolm X, Muhammad Ali (then Cassius Clay), football star Jim Brown and Sam Cooke, respectively.

Already a celebrated television director, King recalls that she was looking “to tell a love story with a historical backdrop” for her theatrical debut as a director. So, when her new literary agent brought her the script for “One Night in Miami,” King describes the opportunity as “so much bigger than I could have ever dreamed.”

“When I read Kemp Powers’ script, it just blew me away,” King says. “I felt like I had never seen conversations like this on screen before.”

“There was a part of me that it was like, if I was a man, I would want to play one of these roles, I would be doing whatever I can to play one of these roles,” she continues. “And just as a mother, as a niece, as a daughter of a Black man. I just felt like I wanted to tell a story or be a part of telling a story that every Black man that I know and love can see a bit of himself in.”

The big-screen adaptation of the hit play from Kemp Powers, “One Night in Miami” is set on Feb. 25, 1964 — when the four men gathered after Clay won the heavyweight boxing title for the first time. The meeting was real, but the conversation between them has been fictionalized, giving audiences an intimate look at the men before they became icons.

Hodge was the first actor to sign on for the film, while Ben-Adir and Goree had previously battled for the chance to portray Clay in a biopic set to be directed by Ang Lee (Ben-Adir won the role before the project fell apart). Tony Award-winner Odom Jr. had previously been offered the role of Sam Cooke in productions of the play, but the timing never worked out. And when the film came his way, the “Hamilton” star initially turned it down.

“I wasn’t too inclined to step into the shoes of Sam Cooke,” Odom Jr. admits, sharing that he also turned down the opportunity to play Sammy Davis Jr. in another film. But after his team asked him to reconsider the Cooke role, Odom Jr. saw the product in a new light.

“I saw what brother Kemp was doing with these four gentlemen on this actual night, that this imagined interaction with them was that he was having a private conversation publicly,” he says. “There were some things that we could say in this room that we don’t share. You know, we don’t have these conversations publicly. And there’s something exciting about that.”

Hodge signed on for similar reasons, explaining, “The conversation that these men are having throughout this entire film speaks to everything that we’re dealing with now. So, we can put that conversation on a grand stage and help to either teach people what it is [Black people are] going through and also teach us how to have that conversation within our own circles, so that we can keep moving forward towards real progress.”

It’s a conversation Hollywood is continuing today. Calls for inclusion have recently led to policy changes, like the new guidelines from the Academy of Motion Picture Arts and Sciences that require certain criteria be met for a film to be eligible for best picture beginning in 2025. King – who won the best supporting actress Oscar in 2019 for her work in “If Beale Street Could Talk” – addressed the Academy’s new inclusion guidelines.

“I look at it as an opportunity to expand, to be able to think beyond,” King says, adding that she hopes to see people be creative with considering actors of color for roles, even when they were initially envisioned for white actors.

“And [though] you may have written it with someone white in mind, but then you cast someone that’s Black in it, allow them to bring all of those wonderful things that have to do with being Black to the role, that makes it that much more complex,” she continues. “And not saying that wonderful things about being Black, meaning that it has to have a certain racial tone to it. But, for example, [if] there’s a scene about hair or doing your hair and you cast me in it, that’s going to be a different hair scene than it probably is going to be if Reese Witherspoon was doing the hair scene. So, allow those things that are specific to the person that’s playing [the role] be in that story. So, I see it as an opportunity of true growth.”