Continue to Variety SKIP AD
You will be redirected back to your article in seconds
Sep 16, 2020 10:00am PT 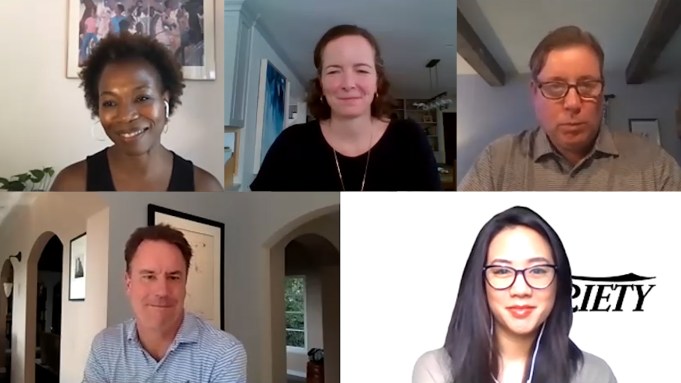 Insurance for a $60 million film has increased tenfold in the age of COVID-19. And that’s just one of many changes film industry professionals have had to face.

In the sixth iteration of Variety‘s “Rebooting the Entertainment Industry” streaming room series, sponsored by PwC and the Ad Council, Variety senior reporter Elaine Low moderated a conversation on the future outlook for growth in the industry. Panelists included Greg Boyer, a partner and U.S. media and consulting leader at PwC, Mark Gill, the president and CEO of Solstice Studios, Allison Page, the president of Magnolia Network and Syrinthia Studer, executive vice president at Nickelodeon and Awesomeness Films.

The event covered current difficulties when creating new films and television shows as well as potential changes made to the entertainment industry even after the return to normalcy.

“I think the appetite for good content hasn’t waned at all,” Page said. “I think how that content is made, where it’s made, who’s making it, that is all kind of being thrown into question. I look at a lot of the content that’s getting shot during this time, and the production values are different, the style is different, but I think it actually lends an even greater air of authenticity to it.”

But creators have had to face a lot of changes when adapting to provide the content their audiences crave. Aside from the spike to insurance costs, Gill added that booking actors is even harder because stop dates for filming are much more up in the air. The pandemic, he said, has simply exacerbated the difficulties and barriers that already existed.

“Every possible way that it was already hard, it’s now just a lot harder, and we all have hopes, of course, that this will pass,” Gill said. “There’ll be, God willing, a vaccine or better therapeutic treatments and so on, but at the moment it’s brutal.”

For Page, overseeing the launch of Magnolia Network amid a pandemic has brought both positive and negative variables to the table. On one hand, their launch schedule is now extended, giving the team more time. On the other, the decline of linear networks means every moment counts.

The experience has taught her team to question tradition, though. Everything from the standard amount of episodes in a season to the lead-up in launching a show has been reconsidered over and over.

Breaking from tradition is something that will likely last into the future, Gill said. Technology and social distancing have challenged the importance of travel, with Apps like Zoom proving that traveling an hour for a short meeting isn’t always necessary. Mental health efforts and a renewed focus on empathy have also broken into the business world.

“We’ve seen a real change of mindset that says, ‘Hey, we can explore new and different ways to do things,’ whether that be shared services, different ways to get work done, working remotely,” he said. “I think this has probably opened a lot of eyes in terms of all the unique situations that we all have to deal with being parents, being neighbors, being friends, being colleagues.”

Studer, who works at Nickelodeon and caters content specifically to younger audiences, is also a mother. She said that though she started working at the company amidst the coronavirus shutdowns, the work-from-home option has created a healthy environment she hopes to carry over when in-person jobs begin again.

“I’ve carved out my breakfast and my lunch for my son,” she said. “I don’t know if there’s a way to incorporate that into this new world that we’re going to enter into when things get back to some semblance of normal, but there has been some flexibility that as a mom I’ve greatly appreciated, and I hope for myself and for my colleagues that we’re able to find some balance.”