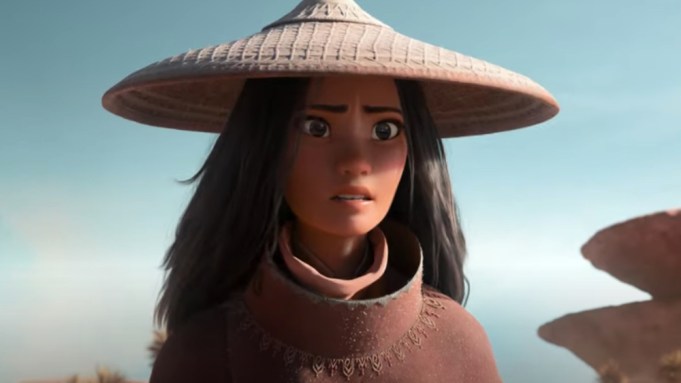 “Raya and the Last Dragon” will premiere on Disney Plus at the same time as it opens in theaters this spring.

The computer-animated fantasy film will be available to rent on Premier Access, which comes with a hefty nearly $30 rental fee. Only Disney Plus subscribers will be able to watch the film on the service. The announcement was made at Thursday’s investor presentation, in which the company revealed that it was planning 10 Marvel and 10 “Star Wars” series for the streaming service.

It also comes a week after Warner Bros. announced it would release its entire 2021 slate on HBO Max at the same time they open in theaters — a list of titles that includes “Dune,” “Matrix 4” and “The Many Saints of Newark.”

“Raya and the Last Dragon” will be released on March 5, 2021. The film features the voices of Kelly Marie Tran and Awkwafina. The story unfolds in the fantasy world of Kumandra in ancient Asia, where humans and dragons lived together peacefully. That harmony is interrupted when sinister monsters known as the Druun threaten the land, which causes the dragons to sacrifice themselves to save humanity. Some 500 years later, those monsters return. Facing disaster, a lone warrior, Raya, tracks down the last dragon to aid her and save the kingdom.

Disney previously premiered “Mulan” on Premier Access. With many theaters closed due to COVID-19, it has also opted to send some movies to Disney Plus as a way to bolster the service. “Artemis Fowl” has debuted on Disney Plus, forgoing a theatrical release. Pixar’s “Soul” will hit the streamer on Christmas Day.