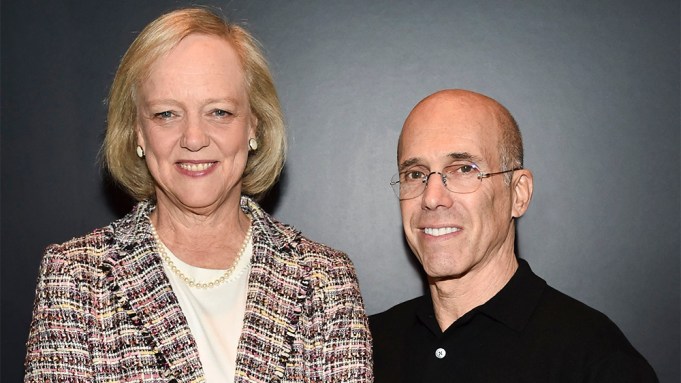 Jeffrey Katzenberg has heard the chatter about streaming wars, but the media mogul thinks that when the dust settles, the fight to attract audiences won’t end with just a few victors.

“Everybody suddenly wants to declare winners and losers and the fact is there’s only winners and winners right now,” he said during an interview at the Variety studio. “Netflix is on a tear and continues to be. Disney has had a brilliant, brilliant launch and offered a spectacular product and a great user experience.”

He predicts that HBO Max and Peacock, the upcoming streaming offerings from WarnerMedia and Comcast, will meet with similar success. Of course, Katzenberg has a reason to offer such a rosy view. He’s the founder of Quibi, a streaming startup that intends to offer short-form videos designed to play on mobile phones, and one that has raised over $1 billion from the likes of the Walt Disney Company, NBCUniversal, Sony Pictures, WarnerMedia, and ViacomCBS. However, he and Quibi CEO Meg Whitman argue that what the company is doing is very different from what’s currently playing on Disney Plus. They want people to check out their shows primarily between seven in the morning and seven at night.

“You’re at a doctor’s office, you’re commuting to work, you’re waiting for the kids at school and you have these in-between moments,” says Whitman. “We’re bringing the best of Hollywood content…to an entirely new environment.”

As for Katzenberg, he said the company came to Sundance not only to promote the new platform, but also to attract talent.

“This is one of the most unique and valuable filmmaking communities,” said Katzenberg, adding that this time he was in Park City to “…carry our message and to make sure that the red carpet is out for the independent filmmaking community. We need content from the best, from every part of the planet.”

As part of their pitch, Katzenberg and Whitman were accompanied by Kaitlin Olson (“It’s Always Sunny in Philadelphia”) and Veena Sud (“The Killing”), both of whom are making shows for the service.

Both women said they were thrilled with their experience on the platform.

“They’ve got a lot of money, which is great, and they find people who they trust and think are creative and they let them do their thing,” said Olson, who is starring in comedy series “Flipped” opposite Will Forte. The fact that Quibi’s shows are designed to be viewed on mobile phones also gives creative talent a new way to engage with audiences. Sud’s series, “The Stranger,” is a thriller that follows a rideshare driver who picks up a lunatic. Over course of 13 days, new episodes will drop. A text message, with an eerie ringtone that signals it’s from the lunatic, lets viewers know there’s a new episode to watch. Sud said she sees Quibi as giving her “a brand new crayon box full of Technicolors…I had five crayons and now I have 50.”

Quibi is scheduled to launch on April 6 and plans to charge $4.99 for its service with ads and $7.99 a month without ads. Katzenberg and Whitman were coy about how they planned to measure success, but their ambitions are great.

“We really want to see if we can create this next generation of film narrative, filmed entertainment narrative,” said Whitman. “There was movies, television. We hope that that phone in your hand will be the next big opportunity for creators in Hollywood.”

Katzenberg said that the explosion of platforms was a boon for the indie filmmakers who flock to Sundance every year.