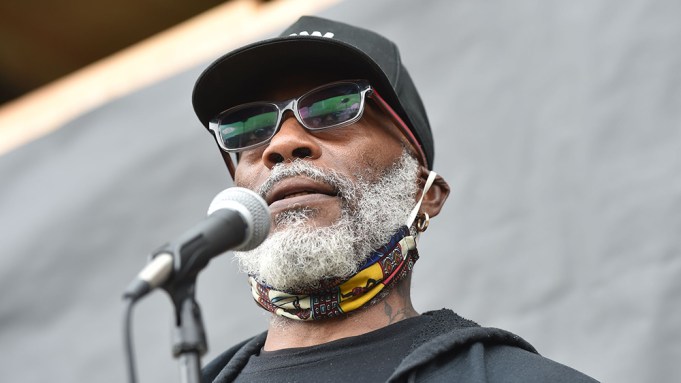 Protesters gathered on Friday at the Academy of Motion Picture Arts and Sciences to support the Black Lives Matter movement.

The protest comes one day after David Oyelowo, who starred in the 2014 best picture nominee “Selma” as Dr. Martin Luther King Jr., revealed that Oscar voters were angered by the cast wearing T-shirts that said “I Can’t Breathe” to the film’s Los Angeles premiere in protest of the murder of Eric Garner. Director Ava DuVernay confirmed the story on Twitter.

“Members of the Academy called in to the studio and our producers saying, ‘How dare they do that? Why are they stirring s–-?’ and ‘We are not going to vote for that film, because we do not think it is their place to be doing that,'” Oyelowo told Screen Daily’s Screen Talk.

Actress Aunjanue Ellis, Milauna Jackson, Tanayi Seabrook and Stephanie Lacey orchestrated the gathering to provide a space for willing performers to sing, read poetry, dance, speak and express themselves. Attendees were encouraged to bring masks, hand sanitizer and gloves as health precautions against the spread of the coronavirus.

“All this pushback and hatred for myself has helped to empower me, actually,” speaker Carlton Wilborn said. “Because I realize, and we all know, that don’t nobody try to keep a thumb down on nothing or try to push back on something they think is less than them. So let’s be clear about that, as we are feeling the emotions and getting upset… that we don’t make it lose sight of our personal value.”

“The idea of a good and bad cop needs to go. There are good and bad people who may have taken on the uniform, but the job cannot have those options when people’s lives are at stake,” speaker Elijah Reed said to applause.

Paramount has made “Selma” a free rental on digital platforms through the end of the month.