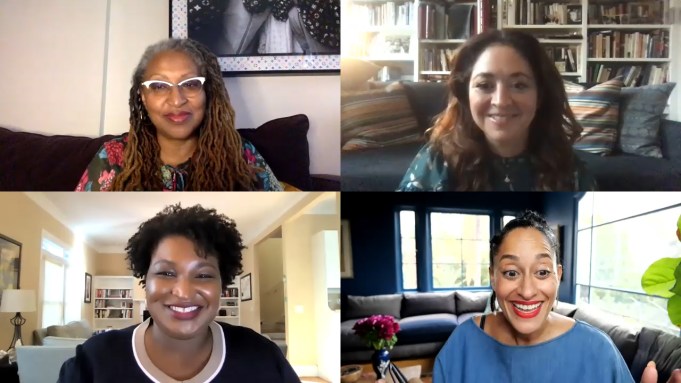 For “All In: The Fight for Democracy” filmmakers Liz Garbus and Lisa Cortés, the documentary, which delves into the centuries-long construction of voter suppression in the United States through the lens of Stacey Abrams’ 2018 bid for Georgia governor, is both “good spinach” and akin to a horror movie.

“It’s sort of like every time you think that monster’s coming out and you’ve slayed the dragon, another little monster rises up just when you thought it was safe to go back in the water,” Garbus said.

Abrams, who produced the film and founded Fair Fight Action, a national voting rights organization based in Georgia, participated in Variety’s Power of Women: Conversations, presented by Lifetime. Abrams was joined by Garbus, Cortés and moderator Tracee Ellis Ross for the panel titled, “All In: Why Women Will Determine the 2020 Presidential Election.” The conversation focused on the vital role women and communities of color play in the upcoming 2020 election and how people can fight against voter suppression through voter turnout and education.

To spread awareness about voter suppression and deliver resources to the public ahead of the presidential election, Amazon Prime Video will make the documentary available for free on its YouTube channel beginning Oct. 29 at midnight ET until Nov. 1.

Following the 2018 Georgia gubernatorial election, in which voter suppression played a decisive role in Abrams’ loss, the activist and politician said she wanted to tell the story of the history of mass disenfranchisement without starring in the film. However, her experience was what Garbus describes as the “connective tissue” that allowed the movie to jump between the past and present to underscore the magnitude of voter suppression, which Garbus said exists not only in one state or election in a vacuum, but rather is the “culmination of years of evisceration” of the Voting Rights Act through the Supreme Court decision in Shelby County v. Holder and state-wide legislative acts.

Tracing the history and structural aspects of voter suppression in a comprehensible way was the ultimate goal for the panelists, who sought to underscore the various “monsters” that disenfranchised Black communities following Reconstruction, from Black Codes to the Mississippi Plan and beyond.

“From the inception of our country, race has been the most singular target of voter suppression,” Abrams said. “Women were silenced in the Constitution; they were not considered part of the body politic, but the explicit exclusion of Blacks — we were denied humanity, Native Americans were denied existence and then the 1790 Naturalization Act said that only white people of good character could even think about moving to the United States and becoming citizens, so that knocked out everyone else.”

But while the film paints a clear picture of the power dynamics at play that target not only people of color but also young people as well as low-income people, it was also important for the panelists to offer a glimmer of hope through the idea that “voter turnout is the best answer to voter suppression.”

While the onus should not be on people to navigate the complex voting ecosystem manufactured by federalism, Abrams advocated that viewers visit the All In For Voting website for comprehensive information on how to register to vote, stay registered, cast one’s vote and ensure it gets counted across all 50 states and Washington, D.C.

“Voting isn’t magic, it’s not going to fix every moment,” Abrams said. “But because of the demographic changes in this country, we’ve got more currency than we’ve ever had before.”

Ultimately, the panelists emphasized that fighting for voting rights will constitute a continual process.

“The reality is, when this election is over, it’s not over,” Abrams said. “Evil doesn’t relent, simply because it gets pushed back. In fact, it redoubles its efforts. And so my belief is that the work will not be done until we have the legal protections that restore what we had with the Voting Rights Act, but finally fully achieve what we should have had with the Constitution, which is the right to vote is real for every American, and that’s what we’re going to keep fighting for.”