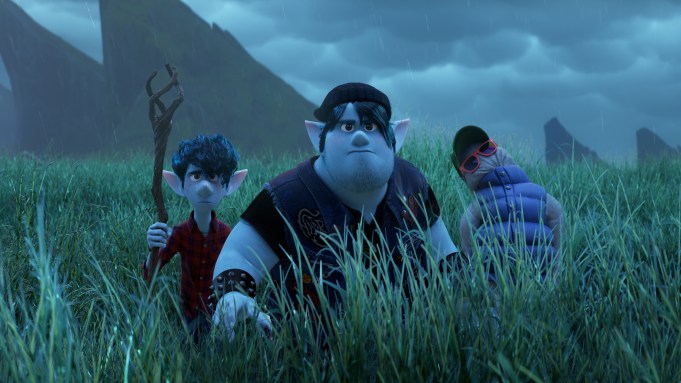 Disney and Pixar’s “Onward” is expected to dominate moviegoing in North America when it debuts this weekend. The family-friendly animated adventure should collect $40 million to $45 million from 4,200 theaters in the U.S. and Canada.

“Onward,” anchored by voice performances from Tom Holland and Chris Pratt, isn’t the only new movie launching, but it will have no trouble leading box office charts. “The Way Back,” a sports drama starring Ben Affleck, is eyeing an opening weekend between $6 million to $10 million from 2,718 venues — a lackluster start given its A-list leading man. Unless the film, marketed as a big-screen comeback of sorts for Affleck, beats expectations, it looks to become another dud for Warner Bros. Many of the studio’s 2019 releases — “The Good Liar,” “Motherless Brooklyn” and “The Kitchen,” to name just a few — all stumbled out of the gate with disastrous single-digit opening weekends. “Joker” and “It: Chapter Two” were bright spots, but “Birds of Prey,” the first movie the studio released this year, fell short of expectations and looks to lose money.

“The Way Back” reportedly cost $21 million to make, less than Warner Bros. spent on mid-budget misfires like “The Goldfinch” and “Richard Jewell.” Those films, which also underperformed at the box office, each carried price tags around $45 million. Gavin O’Connor (“The Accountant”) directed “The Way Back,” a gritty look at an alcoholic construction worker who is recruited to become the head coach of a high school basketball team. Affleck’s performance has been praised, but the movie doesn’t look like it’s getting the kind of overwhelming support needed these days to galvanize crowds for intimate dramas.

While “The Way Back” should appeal to male moviegoers, “Onward” will vie for attention from ticket buyers with young kids. If estimates hold, it should see inaugural weekend box office receipts similar to Pixar titles such as 2017’s “Coco” ($50 million), 2017’s “Cars 3” ($53 million) and 2015’s “The Good Dinosaur” ($39 million). “Onward” has already generated $3 million globally from several early screenings that Disney hosted on Leap Day. Internationally, the film is opening day and date in most major territories other than Italy, Korea and China, where coronavirus has reached outbreak levels.

The fantastical film, directed by Dan Scanlon, centers on two elfin teenage brothers who embark on an adventure after receiving a magical gift from their father, who died when the boys were young. “Onward” has gotten mostly positive reviews, though critics have been less high on this film compared to other Pixar offerings. Variety’s Owen Gleiberman described it as “friendly and winsome and at moments breathtaking,” but “nevertheless the kind of Pixar film that feels like it was compounded almost entirely out of other visions.”

Also opening this weekend is A24’s “First Cow,” a drama about a 19th century cook who travels with fur trappers to the Oregon Territory. Kelly Reichardt directed the movie, based on Jonathan Raymond’s novel “The Half-Life.” Since premiering at Telluride last year, “First Cow” has been well received by critics.

Elsewhere, Focus Features’ Jane Austen adaptation “Emma” is expanding nationwide to about 1,500 theaters. After two weeks in limited release, the movie has made $1.5 million at the domestic box office and $11.4 million overseas. Anya Taylor-Joy plays the titular role in “Emma,” a satirical take on the classic tale about an aspiring matchmaker.

At the specialty box office, Sony Pictures Classics is releasing “The Burnt Orange Heresy” in four theaters in New York and Los Angeles. The movie — a heist thriller starring Claes Bang, Elizabeth Debicki and Mick Jagger — follows an art critic, who has fallen from grace, tasked with stealing a painting from a reclusive artist.