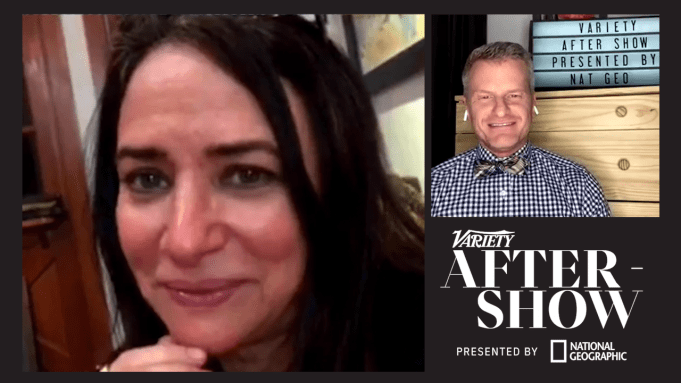 Pamela Adlon is wiping away tears and sniffling a bit. She just finished watching the Season 4 finale of her FX series “Better Things.”

“I’m so emotional,” she said during an appearance on Thursday night on Variety’s “After-Show” on Instagram. “It just killed me. It’s very many feelings.”

Calling the series, which is loosely based on their lives, “beautiful,” the trio also said they were “very, very proud” of their mother.

Unlike so many shows that didn’t complete filming their full seasons because of the coronavirus crisis, Adlon and her cast and crew wrapped before productions began shutting down.

“I had to do my sound, color, VFX and ADR all from an iPad from the house, when I was cooking sometimes,” Adlon explained. “It’s been extraordinary because I was able to finish my season before the COVID so I can’t get my mind around that some were shooting their season and they couldn’t finish. That really blows. I’m really lucky.”

The series hasn’t officially been picked up for another season. Even if it had, Adlon probably wouldn’t be writing any scripts while in quarantine. “How do you write the show right now?” she said. “What is the world going to look like? Can somebody kiss somebody? Can we shoot a scene in Dodger Stadium? Can we shoot a scene in New Orleans? Can we do all these things?”

Season 4 ended a few days after Frankie’s bat mitzvah and quinceañera celebration, dubbed a “batceañera,” where Sam spotted her flirting with another girl at the party. Fans of the show have speculated about Frankie’s gender identity and sexuality. Adlon said she has purposely stayed away from giving her any definitive labels. “I’ve always felt on both sides of the line in terms of the way I feel about myself,” she said. “I’ve always been kind of gender dysmorphic in my brain and my body.”

She also points to the example set by her daughters’ friends. “Everybody is fluid,” Adlon explained. “I don’t think anyone of them would say, ‘I’m straight. I like one or the other.’ That doesn’t even exist in our lives. I was able to portray that and not give into the pressure of ascribing a label to Frankie.”

Adlon will next be seen in the Judd Apatow-directed “The King of Staten Island.” Pete Davidson stars in the film, which is partially based on his own life. Adlon plays the ex-wife of the man (Bill Burr) who is dating Davidson’s mom (Marisa Tomei). Universal recently announced that the dramedy will skip a theatrical release and go straight to video on demand on June 12.

“I love him,” Adlon said of Davidson. “He was just a beautiful sweet creature. I recently saw a little film of a little bay turtle born with its heart outside of his body thumping and that reminds me of Pete Davidson.”