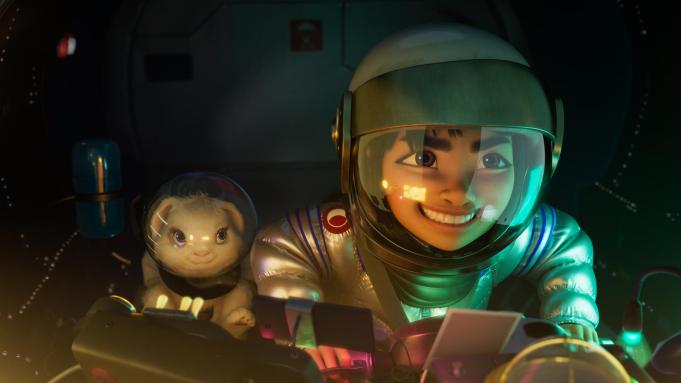 Netflix and Pearl Studio unveiled the first trailer for their animated film “Over the Moon” on Tuesday following a virtual discussion with some of the cast and crew about the pic last week. Actors Sandra Oh, Phillipa Soo, John Cho, Ruthie Ann Miles and newcomer Cathy Ang joined producers Gennie Rim and Peilin Chou, along with director Glen Keane, to discuss the making of the movie, a musical adventure about a young Chinese girl named Fei Fei (Ang), who builds her own rocket ship to travel to the moon in order to prove the existence of the legendary Moon goddess Chang’e (Soo).

Soo, a Tony Award nominee for her work in “Hamilton,” noted that she has known about the story of Chang’e since childhood, through a children’s book written by Amy Tan. “I remember as a kid, asking my dad to read it over and over and over to me. Because I was just obsessed with this idea of the moon lady,” Soo said. “And when I was asked to play her, I was of course honored because it’s so infrequent that I’m being asked to play specifically Chinese characters. And also even more rare that I get to be in a film with incredible Asian actors who are surrounding me. So when I read the script and they invited me to come join them to create this beautiful story, I was, of course, immediately on board and so excited.”

Cho also said he was happy to join the project for many reasons, including being able to show his children an animated film with such diverse representation. Although he notes that it’s becoming more the norm for a younger generation. “For my daughter, while we were watching this film, I was like, ‘This is so amazing, look at all these Asian animated faces.’ And she was nonplussed,” he recalled. “And I was so thrilled about that. [A] world where giving her content or providing content for her, where this stuff is normalized, is a real gift.”

The film also marked a reunion for Oh and screenwriter Audrey Wells, who died in 2018 from cancer. Wells had written and directed the films “Guinevere” and “Under the Tuscan Sun,” both of which featured Oh. The actor ran into Rim at Wells’ memorial at the Writers Guild of America and was reminded about the script. Oh was concerned with scheduling and also dealing with the loss of her friend.

“I don’t think that really, emotionally, I could read that script. And I still feel emotional about it now, which is why I’m now so grateful that Gennie, you stopped me,” Oh admitted. “And that also, Audrey was really calling to me in a very Audrey way. It’s like, ‘What are you doing? Will you just please do the part, please? Just make your schedule work and just make it happen.’ And I’m so grateful for that because knowing Audrey, knowing her writing, knowing her family and knowing what I believe this film meant to her and her family; to be able to be a part of it was a really great experience for me.”

Before signing off, Ang performed one of the film’s eight songs, “Rocket to the Moon,” with songwriter Chris Curtis accompanying on piano. Keane referred to the song as “the heart of the musical.”