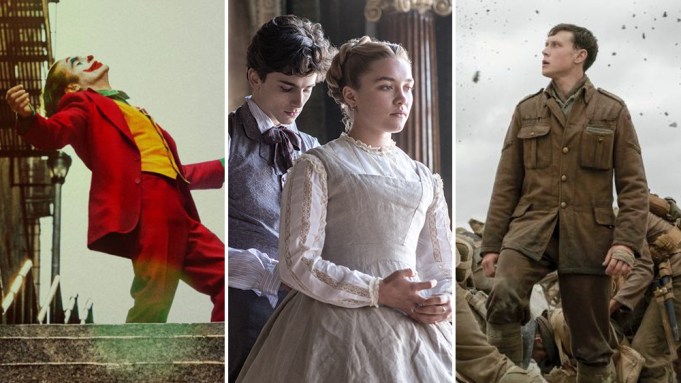 When it came to recognizing this year’s achievements in filmmaking, the Academy Awards nominated movies the public has actually seen.

Five out of the nine best picture contenders have already surpassed $100 million at the global box office: “Joker,” “Once Upon a Time in Hollywood,” “Ford v Ferrari,” “Little Women” and “Parasite.” A sixth, Sam Mendes’ war drama “1917,” just opened nationwide, but is expected to eventually hit that milestone.

The crop of movies have earned a combined $748 million in the U.S. and $1.98 billion globally, according to Comscore, one of the best showings for Oscar best picture nominees in recent history. Contenders last year had earned $1.26 billion at the domestic box office when nominations were unveiled in late January, thanks mostly to “Black Panther’s” massive $700 million haul. Box office receipts from 2020’s nominees, sans Netflix releases “The Irishman” and “Marriage Story,” were more evenly distributed.

In years prior, the Oscars had started to look strikingly similar to the Independent Spirit Awards. To compare, 2017’s nominees (including “The Shape of Water,” “Get Out” and “Call Me by Your Name”) grossed $380 million combined before nominations, while 2016’s films (such as “La La Land,” “Moonlight” and “Manchester by the Sea”) collected $483 million cumulatively ahead of nominations.

“Joker” is by far the biggest blockbuster in this year’s bunch, the rare best picture nominee to gross over $1 billion worldwide. Todd Phillips’ “Joker,” an R-rated origin story based on Batman’s eventual enemy, debuted in October and has been on home video since December. But after the film scored a leading 11 nominations on Monday, Warner Bros. plans to bring “Joker” back to over 700 theaters this weekend.

“1917” (10 nods in total), as well as “Little Women” and “Parasite” (each nabbing six nominations), are relatively early on in their box office runs. They should all expect to see a significant boost in ticket sales after finding themselves in the thick of the best picture race.

Other films, such as Taika Waititi’s “Jojo Rabbit” and Quentin Tarantino’s “Once Upon a Time in Hollywood” were mostly out of theaters by the time nominations were announced.

Those movies could also get renewed life as they enter their home entertainment window. On Tuesday, Fandango reported that “Parasite” ranks among its top five-most anticipated pre-selling digital releases in history.

Two best picture contenders — Martin Scorsese’s “The Irishman” and Noah Baumbach’s “Marriage Story” — are Netflix releases. The films had limited theatrical runs globally, but the streaming service refuses to report numbers so it’s impossible to know how many people actually watched those movies.

Recognizing commercially successful movies could prove beneficial when it comes to the telecast. The ceremony, which regularly clocks in at over three hours, has seen a consistent decline in ratings. The Academy attempted to introduce a “popular Oscar” category last year, in hopes that viewers would be more inclined to tune in to an awards show that spotlights movies they’ve watched. Even without that category — which was swiftly lambasted by the entertainment industry and scrapped before it made its way to ballots — it appears the organization made gains in accomplishing that goal.

“In theory, a more popular and thus more widely seen group of best picture nominees should spark a greater level of interest for the Oscar telecast,” said Paul Dergarabedian, a senior media analyst with Comscore. He noted that the Academy Awards telecast where “Titanic” won best picture scored some of the highest ratings. “However, there are many factors that determine how popular the telecast may be, including the combination of talent in the running.”

Below is a full list of box office grosses (as of Jan. 13) for 2020 Oscar best picture nominees: