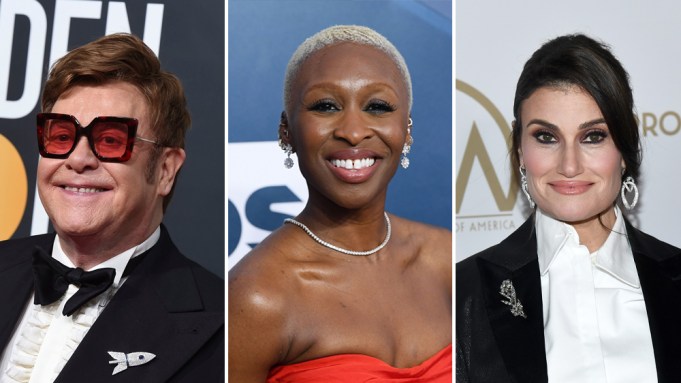 All five of this year’s Oscar-nominated original songs will be performed during the awards telecast on Feb. 9, the Academy of Motion Picture Arts and Sciences announced on Thursday.

The performances will be:

“I Can’t Let You Throw Yourself Away” from “Toy Story 4”: Performed by Randy Newman; music and lyrics by Newman.

“(I’m Gonna) Love Me Again” from “Rocketman”: Performed by Elton John; music by John and lyrics by Bernie Taupin.

“I’m Standing With You” from “Breakthrough”: Performed by Chrissy Metz; music and lyrics by Diane Warren.

“Into the Unknown” from “Frozen 2”: Performed by Idina Menzel and Aurora; music and lyrics by Kristen Anderson-Lopez and Robert Lopez.

“Stand Up” from “Harriet”: performed by Cynthia Erivo; music and lyrics by Joshuah Brian Campbell and Erivo.

The show will also feature a special appearance by Questlove. A conducted segment by Eímear Noone will mark the first time a woman has conducted during an Oscarcast.

For the second consecutive year, the Oscars will go hostless. ABC Entertainment boss Karey Burke announced earlier this month at the Television Critics Association winter press tour that the Oscars will have “no traditional host.”

Some of the more prominent nominees include Brad Pitt, Charlize Theron, Joaquin Phoenix, Margot Robbie, Leonardo DiCaprio, Al Pacino, Martin Scorsese and Quentin Tarantino. Academy voters came under fire again this year for the lack of diversity among this year’s nominees. Erivo is the only person of color nominated in the acting categories. The directing nominees are also all male.