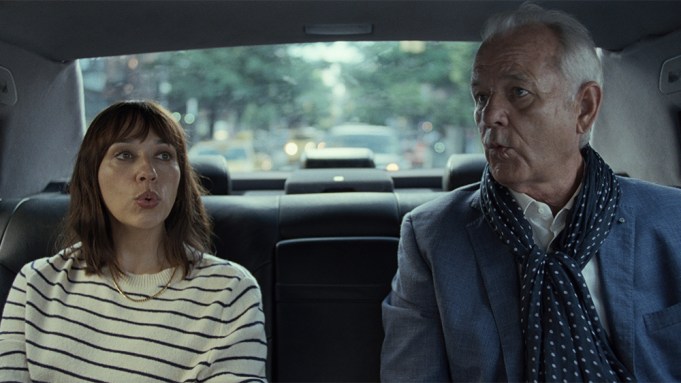 “On the Rocks,” a comedic drama starring Bill Murray and Rashida Jones, debuted its first trailer.

The upcoming film, from A24 and Apple TV Plus, is written and directed by Sofia Coppola. Jones stars as Laura, a writer who suddenly becomes suspicious of her husband’s (Marlon Wayans) busy work schedule and frequent travel. She and her charming, impulsive father Felix, played by Murray, soon find themselves following her husband around New York City in search of answers, but the generational differences between Laura and Felix soon become obstacles. The marital detective work soon becomes a comic adventure across the city, drawing father and daughter closer together despite one detour after another.

“I wanted to do something that was a little bit lighter and more playful with a lot of heart and sincerity,” Coppola told Entertainment Weekly. “Felix is an old-world gentleman used to talking over martinis. The way he looks at women and relationships, he’s giving advice from his perspective, which is different from how Laura’s husband is, and she’s trying to see it from his view.”

Coppola and Murray previously worked together on 2004’s “Lost in Translation” and the Netflix holiday special “A Very Murray Christmas” in 2015. Her most recent film, “The Beguiled” in 2017,” earned her the best director award at the Cannes Film Festival, the second woman to ever win the honor. She also received an Academy Award for best original screenplay for “Lost in Translation.”

“On the Rocks” was shot in New York City in 2019, prior to the widespread production shutdown as a result of the COVID-19 pandemic. The film is set to be released in theaters and on Apple TV Plus in October.