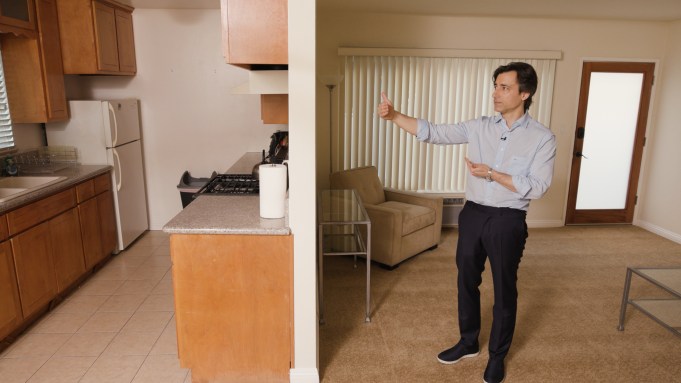 Movie sets are ephemeral spaces, by design. They are built or found specifically to serve stories, and struck down just as quickly.

Which is what makes a recent visit (or revisit) by Noah Baumbach to a pivotal location in his Oscar-nominated “Marriage Story” so special — when Variety followed the director to the apartment set that was redressed almost exactly as it appeared in his Netflix film, shot two years prior, in Los Angeles.

The rental was a stark box occupied by Adam Driver’s character Charlie Barber, a New Yorker in need of a California residence to aid him in a contentious divorce with his ex, Scarlett Johansson’s Nicole Barber.

It is the site of a vicious, cathartic, and irrevocable fight — one that Baumbach has repeatedly said his film spends most of its time barreling toward. It is also one that critics have marked as the defining moment of the film, and one that fans on social media have appropriated as a forever meme to illustrate high-stakes conflict.

“It actually gives me anxiety to be in this space,” Baumbach admits, surveying the empty walls. Luckily, the space is now used as a short-term rental and was easily accessible (the original furniture a different story, but a battle won by production designer Jade Healy).

“The scenes that were shot here had a certain degree of intensity. They’re important scenes for the movie but they were quite emotional. We spent a lot of intense, I’ll use that word again, time here,” he says.

Baumbach recalled that production used several units in the building, tucked behind a casual Brazilian restaurant on the very edge of West Hollywood, where Sunset Blvd. turns a bit shadowy but palm trees are still visible from the aging windows.

“We had rooms upstairs, the actors had rooms and I had a room, and we’d sort of come down, it’s almost like a boxing ring,” he says, removing his jacket and rolling his sleeves.

Baumbach indulges us in great detail, his intention behind every frame of the scene — one designed to show the uncomfortable closeness of his characters despite their total individual isolation. It’s a space where so much nothing means everything, walls are broken 100 times over, and a single unmoved juice box represents a family fractured forever.

Watch Baumbach relive the scene in full, above.