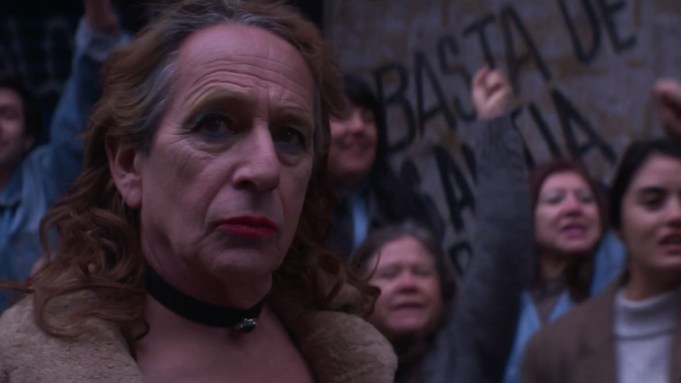 Chile’s Forastero has shared with Variety the first trailer for it is highly anticipated, pan-Latin American co-production “My Tender Matador,” staring the country’s most prolific lead actor Alfredo Castro “The Club”).

Co-produced by Forestero in Chile, Tornado in Argentina, Caponeto in Mexico and Zapik Films in Chile, the feature is directed by Rodrigo Sepúlveda Urzúa and based on the the novel by celebrated Chilean writer Pedro Lemebel, a figure decades ahead of his time is his advocacy of gender issues, in an archly conservative Chile under and after the dictatorship of Augusto Pinochet.

Turning on an intimate friendship, the 1986-set feature tells the story of an impoverished, elderly, cross-dresser known as the Queen of the Corner (Castro). After falling in love with a charming guerrilla, the character gets swept up in a covert anti-Pinochet operation.

In the trailer we see the first encounter between the two, and the state of unease around Chile’s capital city Santiago in the last years of Pinochet’s dictatorship. Scenes of protestors facing off against riot police are juxtaposed by more tender moments shared between friends set to a small part of the film’s sure-to-be epic soundtrack.

“This film has been a hard and adventurous task, as it took many years of work to bring this novel to the big screen,” said Forastero producer Florencia Larrea. “But it was possible thanks to a great technical and human professional team. We are very satisfied with the result, and hope that it has a positive impact on audiences around the world.”

“We were always admirers of Pedro Lemebel’s work, so when this project arrived in our hands, it filled us with excitement,” explained Tornado’s Alejandro Israel.

“One of the advantages of doing a co-production is the possibility to upgrade projects and add brilliant professionals, like Aznar and Armstrong, who contribute with their talent and increase the film’s production value,” added Ezequiel Borovinsky, also of Tornado.

“We are very proud to support stories that revalue the importance of diversity and tolerance. Although ‘My Tender Matador’ is set in the ‘80s, it portrays an issue that still affects the world today,” explains producer Diego Martínez-Ulanosky, founder of Mexico’s Caponeto and creator of the Netflix series “Unstoppable.”