By
Adam B. Vary, Rebecca Rubin 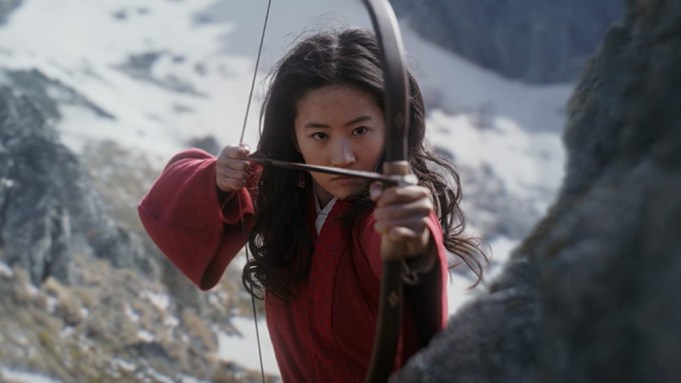 In another major blow to movie theaters, Disney announced “Mulan” will forgo its planned theatrical release. Instead, the live-action remake is premiering on Disney Plus on Sept. 4 for a premium rental price.

The company believes that the release of the action epic will help drive subscribers while serving as a valuable test case to determine how much of their hard-earned cash customers are willing to part with in order to watch a movie that was originally intended to debut exclusively in cinemas.

Unlike the rest of the content available on Disney Plus, “Mulan” won’t be available directly to subscribers. Consumers in the U.S. and other territories will have to pay $29.99 to rent the movie on top of the streaming service’s monthly subscription fee of $6.99. In markets where Disney Plus isn’t available, “Mulan” will play in cinemas.

For now, Disney’s CEO Bob Chapek says “Mulan’s” big move isn’t reflective of a new business model for the company — even though it kind of is.

“We’re looking at ‘Mulan’ as a one-off as opposed to saying there’s some new business windowing model that we’re looking at,” Chapek said Tuesday on the company’s earnings call.

Disney may be signaling to exhibitors that it’s not turning its back on cinemas and that it will respect their ability to have exclusive access to the studio’s content, but Chapek wouldn’t be so interested in testing the waters if the possibility didn’t exist that the studio would dive back into streaming with some other oft-delayed theatrical release. There’s plenty to pick from on that score. Disney has shelved a number of buzzy titles since the pandemic shuttered theaters. Tellingly, Chapek said that Disney wants to “learn from it and see the actual number of transactions.” If those numbers are good, will “Mulan” still be a one-off?

It’s also notable that the form of premium VOD that Disney is testing is very different and potentially more lucrative than others deployed by studios. “Mulan” will cost roughly $10 more than Universal charged for “Trolls World Tour” and it’s sticking the price of a subscription on top of that bill. It remains to be seen if that will be too rich for consumers at a time when unemployment is reaching Great Depression-era levels and benefits may be cut. It certainly makes “Mulan” the priciest VOD release since the failed attempt to offer 2011’s “Tower Heist” to cable subscribers for $60 three weeks after it opened. Universal, the studio behind the Ben Stiller-Eddie Murphy comedy, abandoned those plans in the wake of exhibitor upheaval.

Disney’s decision to mix things up with “Mulan” comes just days after AMC Theatres and Universal stunned investors when they announced that they had reached an agreement that would enable some movies to debut their film on home entertainment platforms within 17 days of their theatrical debut. The two companies hailed the move as an important evolution in film distribution, but other chains such as Regal and Cinemark were cool to the new model. Disney, among all of its major studio brethren, has historically been one of the staunchest allies of the theatrical experience. The announcement may have goosed its stock, but it was a drag on the shares of the major exhibitors.

The decision to put “Mulan” on premium video-on-demand further emphasizes the studio’s increased reliance on Disney Plus at a time when most of their business — from theme parks and cruises to movie theaters and retail stores — have been crippled by the pandemic. Research, Chapek says, suggests that bringing a high-profile release like “Mulan” to homes “will act as a fairly large stimulus to sign up for Disney Plus.”

Chapek added that it gives them a chance to recapture “some of our original investment” on “Mulan.” The movie cost $200 million to produce and many millions more to market and promote on a global scale. That means it will rely on ticket sales — and lots of ’em — if it hopes to turn a profit. Unlike Universal’s “Trolls World Tour,” Warner Bros.’ “Scoob” and other movies that were put on premium video-on-demand platforms in lieu of a traditional release, Disney won’t have to split in the riches from digital rentals since they own the streaming platform.

Originally scheduled to open on March 27, “Mulan” was meant to be one of Disney’s major theatrical releases for the year. The studio mounted a lavish red carpet premiere at the Dolby Theater in Los Angeles on March 9. But just three days later, the cascade of industry closures caused by the COVID-19 pandemic forced Disney to postpone “Mulan’s” release. It was delayed multiple times before Disney indefinitely removed it from the release calendar last week.

It’s yet another stark indication of studios’ dwindling faith that movie theaters will be able to safely reopen in the near future, especially at the scale necessary to support mega-budgeted tentpole movies. Just before “Mulan” was pulled from Disney’s schedule, Warner Bros. removed “Tenet” from its release calendar. The sci-fi epic from Christopher Nolan is now expected to launch internationally starting on Aug. 26 before making its way to select U.S. cities on Sept. 3.

The lack of a theatrical release for “Mulan” is another setback for exhibitors, who had hoped patrons of all ages would turned out to watch the fearless Chinese warrior back on the big screen. “Tenet,” another title that movie theater owners are counting on to revive moviegoing after prolonged shutdowns, is geared toward slightly older crowds.

With sweeping battle scenes and lavishly appointed sets and costumes, Disney shelled out millions upon millions to make “Mulan” a must-see in theaters. In fact, when Disney delayed “Mulan” for the third time in June, co-chairman and chief creative officer Alan Horn and co-chairman Alan Bergman highlighted the necessity to see the film on the silver screen.

“Director Niki Caro and our cast and crew have created a beautiful, epic, and moving film that is everything the cinematic experience should be, and that’s where we believe it belongs — on the world stage and the big screen for audiences around the globe to enjoy together,” said Horn and Bergman in a statement at the time.

Based on the legend of the female Chinese warrior who disguises herself as a man to spare her infirm father from conscription into a war, “Mulan” features a breakout performance in the title role from Chinese actor Liu Yifei, and awards worthy performances from Tzi Ma (as Mulan’s father) and Gong Li (as a mysterious and complex villain). Along with “Crazy Rich Asians,” it is one of the only large-scale releases from a major Hollywood studio to feature an entirely Asian cast.

“Mulan” was always meant to be a global theatrical player, especially in China. But even though Chinese theaters have started to reopen, box office sales have been sluggish without any new content to feature.