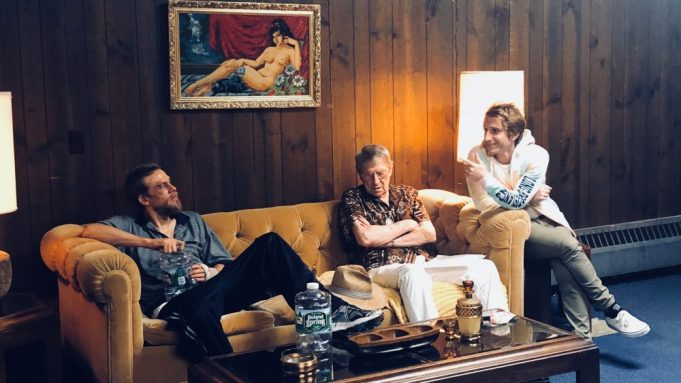 Max Winkler’s “Jungleland” is a throwback to the kind of character-driven, road movies that Hollywood hasn’t made much since the glory days of the 1970s moviemaking.

It’s the story of two drifter brothers who are so desperate to escape their dead-end lives that they accept an offer to ferry a young woman (Jessica Barden) across the country to a degenerate criminal. The film, which opens Friday, stars Jack O’Connell as Walter “Lion” Kaminsky, a bare-knuckle boxer, and Charlie Hunnam as Stanley Kaminsky, his corner-man and manager, who is better at plunging the family into debt than scoring big paydays.

On the eve of the film’s release, Winkler spoke to Variety about the movies that inspired “Jungleland,” why “King Arthur” convinced him to cast Hunnam as the down-and-out Stanley, and his go-for-broke effort to score the rights to a Bruce Springsteen song.

What drew you to this story?

I’ve always been obsessed with “Of Mice and Men.” I love John Steinbeck and the way he wrote about travelers who go from place to place looking for a home. What keeps them going is sort of a simple dream. I’d been interested in that kind of storytelling. Also, it sort of met in the middle with my love of Hal Ashby movies, and “Five Easy Pieces” and Jerry Schatzberg’s “Scarecrow.”

I’d just finished making a movie with Jake Johnson. So, I started writing this for him after he pitched me the seed of this idea. He’d been working on a play about two brothers. The story changed as years passed, but we kept the kernel of the idea about two siblings who don’t know how to say they love each other and who hurt each other even as they try to keep the other one safe. Jake became less interested in leaving home for an extended period of time to shoot this, so we ended up doing some recasting.

The three lead actors all hail from the U.K. even though they’re playing American characters from a blue-collar town like Fall River, Massachusetts. What convinced you to take that geographic leap of faith?

All three actors are from the equivalent of Fall River in England. They’re from the North of England. They had a second-hand understanding of this world. They all connected because of the places that they come from.

Jessica Barden, I’m obsessed with. I’d seen her first in “Hanna” and met with her about my second movie, “Flower,” but that didn’t end up happening. Then she popped in “The End of the F***ing World.”

Charlie is someone who has always excelled in his movie star roles, but I think he’s also a character actor. I think he identifies more as Ratso Rizzo than as a leading man. I’d been going through a weird spell because I have anxiety — just the normal thing for those of us who suffer from Judaism and have aspirations of making movies. I kept watching “King Arthur” on television. When it came out, people had different opinions of it, but I thought it was incredible and the story was beautiful. The first time I met with Charlie, I was raving about it. I told him that I’d shown my therapist the final scene because it’s all about confronting your greatest fear. He thought I was fucking with him.

I’ve been a fan of Jack O’Connell since I first saw “Starred Up.” I knew he had a real interest in fighting and boxing. I wanted to do the boxing scenes without any doubles, so that was very important.

Charlie Hunnam is pretty far removed from King Arthur in this. What kind of physical transformation did he undergo?

He lost about 30 pounds and we cut his hairline way back. He went around with the wardrobe designer to raid the racks at clothing stores and flea markets. He was so committed to this part. There was never one moment where I worried about him finding the character.

The people in the towns where we shot reacted to him so passionately. They love “Sons of Anarchy,” so when he’d appear, you’d think he was BTS. Everywhere we went there were hundreds of people. We needed extra security and decoys to get him out of places where we were shooting.

How did you approach the fight sequences?

I love this fight scene in “Barry Lyndon” where Barry is fighting a soldier and you can just feel how exhausted he is. Fighting is tiring. I wanted you to feel how tiring a miss is, when you don’t connect a punch, but you’ve put all this energy into it. I also love this John Huston movie, “Fat City.” That was a huge totem. I’d never done a movie with fight elements, so I had to learn by doing. We wanted it to feel viscerally painful, but we didn’t want people to get nauseous watching it. So we didn’t want it to be jerky. We wanted a sense of choreography. Of the ballet of it.

Were you concerned at all that Jack was going to get hurt?

Yes. During the final fight, Jack was fighting a real boxer who had never acted before. There were a couple of times where Jack would get nicked. It was overwhelmingly nerve-wrecking, but I had ultimate confidence in Jack. I knew he’d done the work.

How did you get the rights to include Bruce Springsteen’s cover of “Dream Baby Dream” at the end of the film? I know this was a low-budget shoot, so how could you afford that?

That was the hardest part of the entire movie. When you’re editing scenes you use temp music, which can screw you. I couldn’t figure out what the end of the movie is supposed to feel like until I watched that scene with that song. It made the whole fight feel like more of a death march, and less like trying to do “Rocky.”

We were weeks away from premiering at the Toronto Film Festival and we didn’t have the rights to the song. I was starting to lose hope and trying every avenue I could, but there was no response. By this point, I had shown the movie to the actors and they were extremely excited about the song, as well. I had somehow found Bruce Springsteen’s manager Jon Landau’s email. I had sent him a note, but there was no response. So I told Charlie that I didn’t think we were going to get the song and that I was bummed out. Charlie sends me a video where he’s wearing a pink beanie and singing “Dream Baby Dream.”

Charlie is one of the most gifted, honorable, talented men I’ve ever met, but he has one of the worst singing voices that I’ve ever heard. I had a realization at that moment. I said, “Charlie please give me permission to use this video in any capacity I need it.” He said, “Permission granted.” I sent it to Jon Landau as a testament to how much we wanted the song in the movie. Jon Landau said, “This takes real heart.” It was only by sending that video that we were able to get it. If Charlie sounded better, I’m not sure it would have worked.

Is your next movie still going to be “Fruitcake,” the true crime drama with Will Ferrell and Julianne Moore?

We’re going to do that now as a limited series. It’s based on a true story about this man who embezzled all this money at the Corsicana fruitcake factory. My next movie is going to be with Charlie Hunnam. It’s an adaptation of Ben Moon’s book, “Denali,” about a guy feeling alienated from the world who leaves his job and his wife and ends up living in a van with his dog. He goes around the Pacific Northwest. Because so much of the movie takes place outside and is about man’s search for meaning with dog, I think it will be a COVID-friendly shoot.