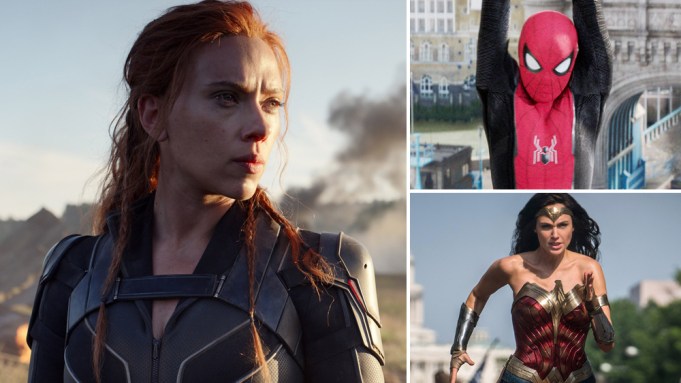 Between the cascade of release date changes announced by Warner Bros. yesterday — including moving “Dune” to Oct. 1, 2021, “The Batman” to March 4, 2022 and “The Flash” to Nov. 4, 2022 — and Disney’s announcement on Sept. 23 that the studio was moving the bulk of its 2020 feature releases to 2021, it’s safe to say that the domestic theatrical business has effectively shut down for the rest of 2020. Just three major studio releases —  DreamWorks’ “The Croods: A New Age,” Pixar’s “Soul,” and Warner Bros. “Wonder Woman 1984” — remain on the calendar for this year, the latter two written in the faintest pencil marks possible.

What is also immediately clear, however, is that theater owners now have a bonanza of potential blockbusters awaiting them to revive exhibition next year, especially when it comes to the backlog of superhero movies.

Consider that by the time “Black Widow” opens on its newest release date of May 7, 2021, it will have been 22 months since a film from the Marvel Cinematic Universe has played in theaters, a drought that has only further exacerbated the perilous health for exhibitors.

After the drought, comes the flood: After “Black Widow’s” premiere, eight Marvel Studios productions or co-productions are scheduled to play in theaters over the subsequent 14 months.

At least, for now. “Black Widow” and “Eternals” are effectively finished, and “Shang-Chi” was midway through production during the shutdown. But after “Eternals” opens next November, there are five MCU features scheduled to open between December 2021 and July 2022, all of which would almost certainly have to start production in the first half of next year to make their dates, on top of the four TV series — “Hawkeye,” “Ms. Marvel,” “She-Hulk,” and “Moon Knight” — that Marvel Studios is producing for Disney Plus for 2022. (A fifth Marvel Studios/Disney Plus series centering on Samuel L. Jackson’s Nick Fury is currently in development.)

That is…a lot of titles to marshal amid a pandemic in which widespread vaccination is not expected until mid-2021 at the earliest, COVID-19 cases are spiking in Central Europe, and soundstage facilities required for massive productions are ever more scarce.

Also consider that Disney is packing a release calendar that also features superhero films from Sony Pictures (part of the studio’s expanding cinematic universe of Spider-Man characters) and the DC Films productions from Warner Bros.

When factoring all those films, 12 superhero movies are set to open over 16 months from March 2021 through July 2022.

Granted, that’s as the release schedule looks today. If we’ve learned anything over these past six months — heck, over the past two weeks — it’s that the pandemic has felled the best laid plans of every studio in town. It’s unclear, for example, whether enough theaters can reopen to sustain DC Films’ “Wonder Woman 1984” at its newest release date of Dec. 25 — meaning that film may also need to push into the already cramped 2021 calendar. Production delays have already forced DC Films’ “Black Adam” to abandon a Dec. 2021 release and vacate the calendar entirely. After “The Batman” had to suspend production for roughly two weeks earlier this month after star Robert Pattinson tested positive for COVID-19, that movie’s release was pushed back five months — providing a stark example of how vulnerable all of these productions are to slowdowns and shutdowns. In light of the death of Chadwick Boseman, it’s also uncertain how Marvel Studios could proceed with “Black Panther II” in its current timeframe.

VFX houses, meanwhile, could be strained by the sheer number of effects-heavy projects to complete over such a concentrated period of time — not to mention the third “Jurassic World” movie, third “Fantastic Beasts” movie, seventh “Mission: Impossible” movie, and fourth “Matrix” movie, all of which are also set to debut over this period as well.

In other words, getting all these movies shot, completed, and released in rapid succession will be a superhuman task.