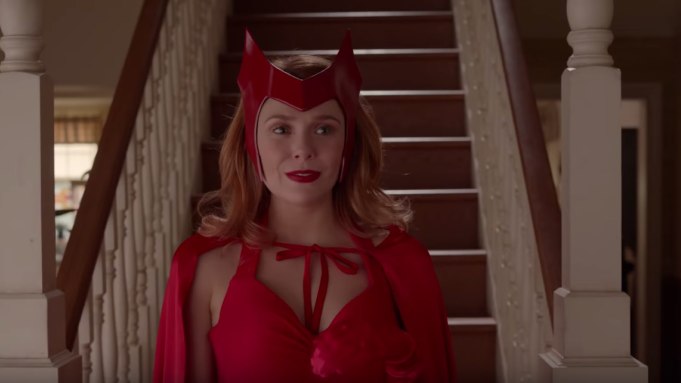 Disney Plus unveiled the first footage from its upcoming Marvel TV series — “WandaVision,” “Loki” and “The Falcon and the Winter Soldier” — during the Super Bowl.

The 30-second trailer teases the expanding comic book world that will unfold on Disney’s streaming service. The new series are set in the Marvel Cinematic Universe and will be interconnected with characters from the film franchise.

“The Falcon and the Winter Soldier” will premiere on Disney Plus this fall. The show takes place following the events of “Avengers: Endgame” as Anthony Mackie’s Sam Wilson (previously the Falcon, currently the new Captain America) and Sebastian Stan’s Bucky Barnes (a.k.a. Winter Solider) team up for a global adventure. Kari Skogland is directing, while Malcolm Spellman serves as head writer.

“WandaVision,” also debuting in 2020, stars Elizabeth Olsen and Paul Bettany as Wanda Maximoff and the Vision. The 1950s-inspired series sees the two superheroes attempting to live the simple life in the suburbs. But, like all things surrounding magic and powerful robot beings, the setting is entirely not what it seems. The footage features both characters jumping in and out of various timelines, even pausing to put Wanda in her classic Scarlet Witch ensemble. Other cast members include Kathryn Hahn and Marvel alums Randall Park and Kat Dennings. Matt Shakman is directing, while Jac Schaeffer serves as head writer.

“Loki” is expected to arrive on Disney Plus in 2021 and, like “The Falcon and the Winter Solider,” also picks up after “Avengers: Endgame.” Tom Hiddleston will reprise his role as the God of Mischief from “Thor” and its sequels, as well as “The Avengers,” “Avengers: Infinity War” and “Avengers: Endgame.” Kate Herron is directing, while Michael Waldron serves as head writer.

Other Disney Plus TV series in the works include “Hawkeye” with Jeremy Renner, “Ms. Marvel,” “She-Hulk,” “Moon Knight” and “What If…?”