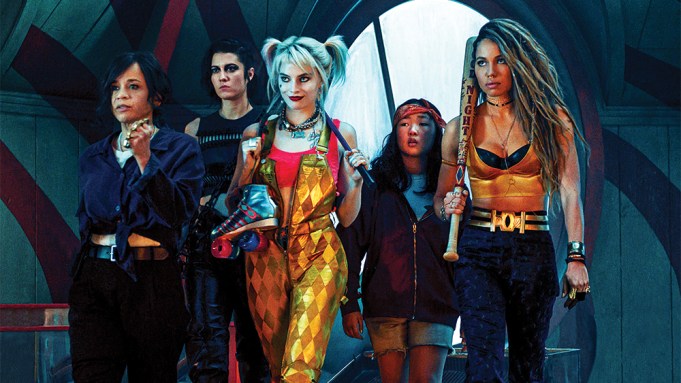 For Variety’s Jan. 2 cover story on Margot Robbie, she talked extensively about her passion project “Birds of Prey: And the Fantabulous Emancipation of One Harley Quinn.” She conceived of the Warner Bros./DC Entertainment movie while filming “Suicide Squad” almost five years ago. Her company, LuckyChap Entertainment, produced the $75 million film, set to be released on Feb. 7

Robbie plays Harley Quinn in “Birds of Prey,” along with co-stars Mary Elizabeth Winstead as Huntress, Jurnee Smollett-Bell as Black Canary and Rosie Perez as Renee Montoya. It’s written by a woman (Christina Hodson), directed by a woman (Cathy Yan) and has women producers (Robbie and Sue Kroll). Could it be the beginning of a franchise? “Look, anything in success could be a franchise,” says Kroll.

Robbie talks about how she grew to understand Harley Quinn, hiring Hodson and Yan and why the Harley fandom makes her happy.

You got the idea for “Birds of Prey” while you were shooting “Suicide Squad.” Tell me about that.

I’d been thinking for quite some time how there was a real gap in the market for a female ensemble action film. And I love action films, and I think there’s a misconception perhaps subconsciously for people: action films are for dudes, girls don’t really like them. Which is just not true. I love them! I know heaps of other women who love them. I loved movies like the Cameron Diaz, Drew Barrymore, Lucy Liu “Charlie’s Angels” growing up. So I knew I wanted to find that, and help put that on screen somewhere.

And then while I was researching Harley, I was devouring the comics. I became kind of obsessed with them at some point. I stopped reading just Harley comics, and that rabbit hole led me to the “Birds of Prey” comics. It seemed like a good platform for a female ensemble franchise, because so many different characters come in and out of the Birds of Prey. And Harley is an easy character to insert into almost any situation, because no matter what, she’s gonna just stir s— up. And I wanted to do an R-rated film, which took a bit of convincing because at that point “Deadpool” wasn’t out.

So it’s surprising, and it’s fun — and it’s told from Harley’s point of view. So you’ve got a very unreliable narrator giving terrible advice, and an inaccurate account of events, quite often contradicting what you’re seeing on screen.

Why do you think you feel so connected to the Harley Quinn character?

There’s definitely an aspect to her that took me awhile to understand, and that was why she would stay in a relationship with a guy that abuses her. But that only took a little bit of research, and reading — and then something eventually clicks into place. I read the play “Fool For Love,” and suddenly I understood her relationship with Mr. J in a way that I couldn’t before that.

She’s a psychiatrist who understands mental illness, but also has mental illness herself. Schizophrenia was a big one that I focused on, because, in the original screenplay, which is always what I go to, one of the lines was, “It’s the voices in my head.” So I clung on to that — it’s the voices in her head. Who are the voices? What are they saying? How many voices are there, and at what times do they kick in? There’s amazing TED Talks from women who in a lot of cases were career professionals, they had PhDs — incredibly intelligent women who had schizophrenia. One of the women was saying how one of the voices in her head gave her all the answers to her final medical exam, for example. Just stuff like that, that I was like, “Oh my god, this is so great for Harley. This is fascinating!”

Harley has this unpredictable nature that means she could react in any way to any situation, which as an actor is just a gift. Between all those things, I really just fell in love with her.

The Joker isn’t in “Birds of Prey” or “The Suicide Squad” sequel, right?

Did you see the Joaquin Phoenix “Joker”?

I did, yeah. He did a phenomenal job. Our world in “Birds of Prey” is very different — the aesthetic, the tone. Very, very different. Ours is certainly a heightened reality. There’s a clear distinction between real life and what you’re experiencing on the screen. I feel like the “Joker” film was much more grounded. Ours is different.

That movie to me was misery. Misery!

You share an agent with Christina Hodson, who wrote “Birds of Prey.” Tell me about that relationship.

We work in a similar way. We pulled a lot of references from the comics that we love, from different movies we love — we were really gravitating toward the idea of not having such a formulaic sort of structure, “Trainspotting” being of one of our favorite films. We would look at a movie like that, and then we’d break it down scene by scene, minute by minute. And funnily enough, it follows a three-act structure to the T, like, to the page, to the minute. And so we would look at a lot of films like that, like: “How did they achieve this feeling of this beautiful chaos, but within it, everything feels satisfying?” So the nonlinear aspect of the film came from those sorts of conversations.

It’s nonlinear. It jumps around. And then it becomes linear for the third act. You go on a ride, and it’s all pretty chronological from there.

It took awhile to get it together, and get it approved by the studio. And then finally we got it greenlit. And we were off to the races.

Five years ago, maybe even three years ago, “Birds of Prey” would have had a male director. lt just would have been the way it was. Things really are different now.

How did you go about hiring Cathy Yan?

With everything LuckyChap does, we put in way more effort looking into female writers and directors for our projects. Because we can put together a writers list or directors list of male names like that [snaps fingers]. To come up with a female list takes longer because they haven’t had the same opportunities, or aren’t in that position yet.

I haven’t seen “Dead Pigs.” What made her right for it?

I loved her movie “Dead Pigs,” because it had an ensemble cast, and I felt I had many moments with every single one of those characters, which I think is a hard thing to do in an ensemble. The world she created in “Dead Pigs” also had a stylistic flair to it. It’s reality, it’s in China modern day. But it had a specific style that was kind of identifiable for that film, which I thought was something we needed for this film.

And then she came in to pitch, and she pitched really well. She had great ideas, she identified plot points that, you know, felt a little clunky, perhaps — and then had great solutions as to how to address them. She spoke to the aesthetic color palette, how she wanted to shoot action, how she wanted costume design to be reflective of the characters’ personalities. It was perfect.

I talked to “Birds of Prey” producer Sue Kroll, and she said that you two went to Brazil’s Comic-Con together, and she found watching the fans react to you really emotional and moving. What’s your experience of the Harley Quinn fandom?

Yeah, it’s so special; it really is. I mean, we love Harry Potter, right?

And so, even if people aren’t a fan of the comics to begin with, I’ve said it to everyone on this job: “Start reading them. You owe it to the fans to respect the source material. Because they adore the source material, and we are so lucky to be bringing that source material to life in a different way. And we have a huge responsibility to them — the way you would want someone to care that much if it was something that you deeply cared about.”

So to go to Comic-Con and play a clip and feel their reaction every time it was something that I know from the comics — like, they’d see Ace Chemicals, and they’d scream. Or they’d see Canary do her cry, and they’d just go ballistic. Or they’d see the Hyena — all those little things, that I was just so happy that they were happy to see. Because it makes me happy too.