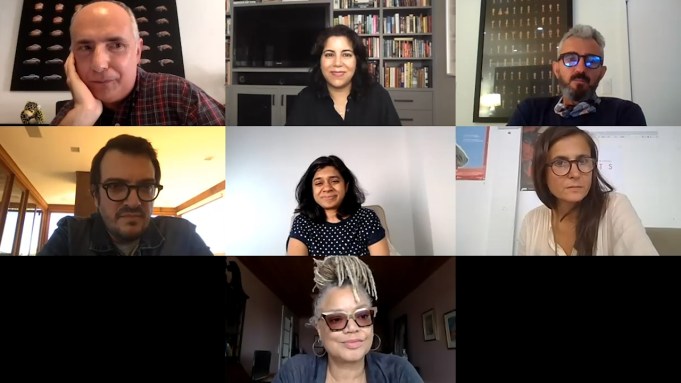 Can the indie ecosystem that’s at the heart of the European film industry survive with streaming giants encroaching on its underlying business model, just as the theatrical experience is teetering?

Maybe. But if the indie filmmaking ethos does survive, its business model will definitely be different.

That was the main takeaway of a webinar on the state of independent film production held with a group of top international producers and talents as part of the Locarno 2020 digital StepIn initiative in collaboration with Variety.

In line with StepIn’s mission as a think tank when, prior to the coronavirus crisis, it was possible to hold it as a physical event some tips and possible solutions emerged.

Brazilian producer Rodrigo Teixeira, who has been instrumental in bringing to the screen films such as “Call Me by Your Name” and “Ad Astra,” kicked things off warning against the danger to filmmakers posed by “big streamers coming in and full financing a movie” because “depending who you are” that can mean “completely losing” your creative freedom. The best way to not capitulate? Make self-financed indie movies on smaller budgets. “If we push the budgets down…we will survive,” at least “in the beginning,” Teixeira said.

Soumya Sriraman, president of BritBox, the streamer devoted to U.K. shows, pointed out that BritBox was established “because the (giant) streamers came in and tried to make all things to all people,” which meant British content was “getting lost in the sea.” That’s why a streaming space where independent could “thrive and subsist” needs to be collectively created. She cited Turner’s short-lived FilmStruck service as a possible model that could be revived and managed with better know how. “That’s what is needed in today’s world!,” Sriraman said.

Film4 chief Daniel Battsek whose knowledge of the film business also comes from running other companies, including Miramax – and who has brought to the screen titles like “Three Billboards Outside Ebbing, Missouri,” “Cold War” and “The Favourite” – welcomed that suggestion and pointed to innovative U.S. distributors A24 and Neon, which recently released Sundance doc “Spaceship Earth” in the U.S. on an innovative patchwork of drive-in theaters, pop-up projections and on demand. By making smart choices they are “embracing filmmakers, so that they feel that they’re a part of the overall lifetime of the film,” he said.

“And then, certainly, if they work with someone like Film4, we work with them throughout the distribution cycle,” Battsek added.

Meanwhile, Paris-based producer Alexandra Lebret, who is managing director of the European Producers Club that lobbies European legislators, said that as part of the EU’s Audiovisual Media Services Directive that will force streamers to program a 30% quota of European content on their platforms the EPC is also pushing for streamers to be forced to adopt co-production business models that leave a portion of rights with producers.

On the other side of the pond, groundbreaking director, writer and actor Kasi Lemmons (“Harriet,” “Black Nativity”) said her biggest fear is for the future of theatrical.

“When I think about ‘Harriet,’ it was a film that was really best enjoyed with an audience,” she said. “You really wanted that community experience; that shared experience of seeing it and hearing everybody’s response to it and the emotional response to it that you got from other people that were watching it simultaneously. I think it will be a huge cultural loss if that’s jeopardized.”

The conversation then turned from post-pandemic scenarios to another big shock that came during the coronavirus crisis. The question of whether the strong impetus prompted by the assassination of George Floyd toward more diversity in all aspects of the industry globally can really make a difference. The answer: probably not much.

“There’s a very real desire for reckoning that I respect and appreciate and I have guarded optimism about,” said Lemmons. “But what’s really going to change?,” she wondered. “It’s going to take so much,” Lemmons said, citing all the “beautiful studies” that have been done over the past 12/13 years” after which “we’re still having conversations about women. You know what I mean?,” Lemmons lamented.

Lemmons’ skepticism was echoed by Canadian/American director, writer, actor and producer Nisha Ganatra (“Chutney Popcorn,” “Late Night,” “The High Note,” “Transparent”). For her, the arrival of streaming giants, Amazon in particular, was initially very exciting, because “it was mimicking the indie film scene of the ’90s,” she said. “But then something changed,” she added. And now Ganatra is alarmed because now “we’re all going in the same direction again.”

But, as an indie filmmaker Ganatra knows she has to find alternate ways to get her projects made. As she has always done.

“Nobody ever said: ‘Here’s money to make your Indian lesbian movie to me. Ever.'” “So we just found a way to make it, and I know that we’ll just go back to doing that again.”