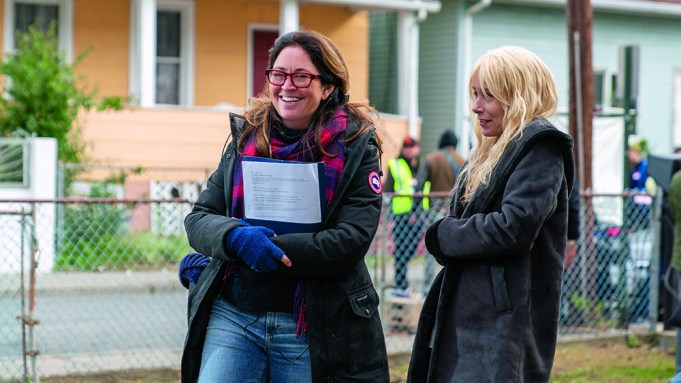 Documentarian Liz Garbus, who makes her narrative feature directing debut adapting Robert Kolker’s 2013 serial-killer best-seller “Lost Girls,” knows a gripping true story when she hears one. Two of her documentaries, “What Happened, Miss Simone?” and “The Farm: Angola, USA,” were Oscar-nominated. In “Lost Girls,” she directs actors for the first time, with Amy Ryan as Mari, mother of murder victim Shannan Gilbert. Gabriel Byrne, Thomasin McKenzie and Lola Kirke co-star in the story of a woman trying to get answers about the fate of her daughter, a sex worker who vanishes in a remote Long Island, N.Y. beach community. The film bows March 13 on Netflix.

Garbus will continue her exploration of true crime with the upcoming docu-series “The Innocence Files” for Netflix and Golden State Killer docu-series “I’ll Be Gone in the Dark” for HBO.

Did you read the book when it came out?

No, but I heard about the murders during that time and remember feeling it was incredibly sad and tragic, knowing that quite often sex workers are incredibly vulnerable. The justice system doesn’t see them as fully human — they don’t look for them in the same way as they might look for a 14-year-old girl from a middle-class home.

Why does the opening title card say “An unsolved American mystery”?

It re-centers your point of view — it’s not a crime procedural, it’s an anti-crime procedural, because there really was no procedure. The focus is on the stories of the women and their voices being heard.

The book says that on the cover. By posting it upfront, we’re showing that we’re not able to say with 100% certainty “here’s the guy who did it.” It enables you to look at the film in a different way.

Has the way sex workers are talked about changed in the past few years?

I feel like what’s different about “Lost Girls” is we really start to understand how that’s not ok anymore. This case had a significant impact. Even pre-#MeToo, over time you saw the language change in the way that newspapers talked about victims. The women who were part of the vigil fought very hard for that.

Their family members knew that their loved ones didn’t just go missing or go on a bender or run away — they were sisters, mothers, daughters, students. This is about believing women.

That dovetails entirely with this political moment and the conviction of Harvey Weinstein. This is an important moment and I think this case is part of the history of it.

At one point Sarah Paulson was going to play Mari and the project was with Amazon. What happened after that?

The project went from Warner Brothers to Amazon to Netflix. It takes a while to get things off the ground — especially with independent films, especially with female driven films that don’t have big male leads. But we had a wonderful freedom at Netflix, and Amy was such an astonishing actress.

You’ve done a few other crime documentaries, but this was the first done as a narrative film. What techniques from documentaries could you bring to “Lost Girls”?

From a directing point of the view, conveying humanity is consistent. You certainly have a sense of observing human behavior, what feels real and what feels false. From a production point of view, it’s entirely different.

What surprised you in working with actors?

The intensity of how much the actors wanted the backstory. We had so much material to pull from. The actors watched archival interviews and listened to podcasts. We were really able to get into these characters.

What was different about making a narrative film as opposed to a documentary?

One of the biggest things is the pace of production and the enormous difference in crew size. When I want to go with a doc I can just go, which is certainly not the case with a whole unit.

Did you want it to feel like a documentary or have a different kind of style?

I was excited to be able to think through how the framing of Mari should progress, and how their home should be structured to augment the progression of the family relationship. Early in the film we have discussions of Mari with her daughters through different rooms, through a pass-through in the kitchen to augment the divide. As time goes on, you get to see the four together in the frame. Those kind of opportunities you don’t see in docs — that’s an example of the added freedom, having that visual toolbox.

It’s been an evolution. Over the last 10 years there have been many wonderful explorations of crime and injustice, obviously seminal works. We’re living in a very vulnerable moment. It reflects some anxiety in and desire for control in a time where things feel very unstable.

The book goes into depth on all the victims’ stories; why does the film center on Mari?

Michael Werwie, the screenwriter, made the brilliant decision that the story of Shannan’s disappearance was a way to explore the entire mystery. Her disappearance brought attention to this case, so it made a lot of sense.

What are some of the questions that are still out there about the cases?

The survivor families — the victims’ relatives — have been shafted and moved around at every turn. It feels like powerful people do not want any real investigation. We’re hoping this film continues to put the spotlight on this case. There are still inexplicable things.

Why can’t the family have Shannan’s 911 tape as the court ordered? They’re defying a court order. There is a lot more that must be known. Otherwise it seems like they would be handling this case differently.

The day that Netflix released our trailer, the Suffolk County police held their first press conference in many years. It just shows you that they’re really not responding to the needs of the case, instead they’re responding to external pressure.

All the family members were texting each other — all the police was releasing was the belt buckle they had had for many years. The families were praying they had some DNA. It’s been a horrible rollercoaster for them.

Who do you think did it?

We present Mari’s point of view, and I would never discount anything she had to say. But it does feel to me there is probably more than one person who knows what went down. The way [the case] was handled over the years has shown an amazing amount of neglect.

Did you get a chance to meet Mari?

I met with Mari before she passed away. I’m very grateful, but I had no idea it would only be one meeting.

Towards the end of her life, the real Mari embraced that mother role. She was really caring for Serra, with her mental illness, in a way she hadn’t been able to with Shannon.

What did you think when you heard she died?

It was just cognitive dissonance. It (the book’s author) Bob Kolker who texted me to let me know. To hear that it was her daughter, it was so tragic. One of the themes of the movie is mental illness — one of the major problems in Mari’s life and her daughters’ lives was the lack of mental health care. When Mari was finally able emotionally to care for Serra was when she had her psychotic break. It was tragic.