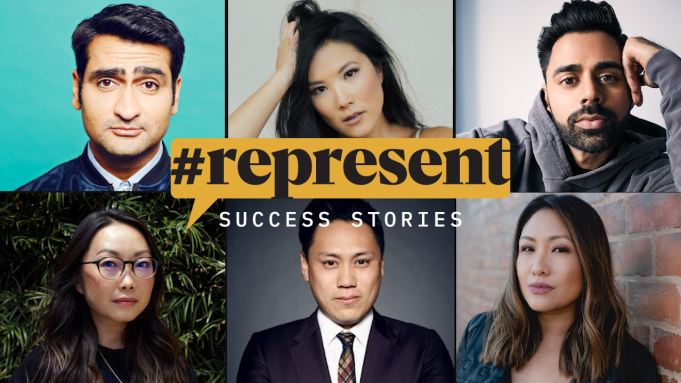 Being able to buy a washer/dryer, refusing to play into stereotypes for roles, the ability to say “no” — that’s how a few of Hollywood’s most prominent Asian Americans have defined success over the course of their careers.

In honor of Asian Pacific American Heritage Month in May, Variety gathered prominent AAPI creatives Kumail Nanjiani (Marvel’s “The Eternals”), Hasan Minhaj (“Patriot Act with Hasan Minhaj”), Jon M. Chu (director, “Crazy Rich Asians”), Ally Maki (“Toy Story 4”) and Lulu Wang (writer/director, “The Farewell”) for a lively discussion about what it means to be successful in the entertainment industry, how their parents and family regard their careers, who their industry role models were as they came up and what what being successful means for AAPIs in the industry going forward.

The virtual roundtable is the inaugural installment of Variety’s “#REPRESENT” series, dedicated to the intersection of race, culture and Hollywood.

Nanjiani candidly reveals that despite nabbing a starring role in the upcoming Marvel movie “The Eternals” and an Academy Award nomination for original screenplay, he still has trouble feeling like he’s “made it.”

“In Hollywood, success is not permanent,” “The Lovebirds” star reveals. “You’re only as good as the last thing, so I still feel that pressure all the time. Especially right now, as soon as you make something, people are like, ‘All right, what’s next? What’s the next thing you’re going to do?”

The Pakistani American actor says he did feel somewhat successful, though, once he started auditioning for parts that were what he calls less stereotypical “brown guy roles.” Although he does remember being up for one part — that of a taxi driver — in a major movie, for which the director asked him to play up his accent; Nanjiani refused.

“Then that movie was hugely successful. And still, I don’t regret it,” Nanjiani recalls, laughing.

It’s a similar story for Maki, the founder of non-profit Asian American Girl Club and voice of Giggles McDimples in “Toy Story 4.”

Maki, who has been working in Hollywood since she was a teenager, is familiar with the stereotypes that plague AAPI actors, “I moved here when I was 14, so my whole life was basically, you either have an accent or you’re this over-sexualized ninja chick, [there] wasn’t really an in-between.”  After she booked the role of Jess on TBS’s “Wrecked” her world was “busted” wide open. “[I thought] If I could play this role, what other kinds of roles could I play?” says Maki, who is fourth-generation Japanese American.

Chu says he celebrated signing on to direct his first studio movie by buying his first washer/dryer. While the movie itself (an on-screen adaptation of “Bye Bye Birdie” for Sony) fell through, he followed it up by directing “Step Up 2: The Streets” — and buying himself a mattress.

But after being panned for most of his work before directing 2018’s “Crazy Rich Asians,” Chu admits he has only recently begun allowing himself to acknowledge the success of that film, the highest-grossing romantic comedy since 2009.

For Wang, success means having the ability to say “no” to projects that she doesn’t believe in or can retain the type of creative control to tell the story she wants. Such was the case on a recent project where she initially turned down a studio’s pitch because she did not feel the scripts were up to par. After being offered the chance to re-write the existing version she pushed back, saying she would want to re-work the show entirely; they agreed.

“They came back and said, ‘We’ll start over. We’ve been developing for a year, but we want you to do it, so you can just take the property, and we’ll just start from scratch,’” the award-winning writer/director recalls. “It was the first time where I actually could say, ‘No,’ and then the studio came around and gave me everything that I needed to do my best work.”

For Minhaj, getting hired at “The Daily Show” marked the first time he felt he could pursue comedy as a career. As the host of Netflix’s “Patriot Act with Hasan Minhaj” and the son of immigrants from India, he says he continues to draw on his family’s “immigrant hustle” in his own career.

Minhaj filmed his Netflix comedy special “Homecoming King,” based on a story he told for The Moth, which won him a Peabody Award in 2018; he co-created “Patriot Act” with his friend Prashanth Venkataramanujam. He says success for AAPIs in Hollywood is the ability to create original work without looking to traditional gatekeepers for approval, while bolstering other AAPI creatives in the process.

“We’ll be in the writer’s room really late at night and we’ll be getting an episode ready. And I just think about me, this kid whose family is from Aligarh, and he’s this South Indian kid who grew up in Chicago. And I tell him this all the time, I’m like, ‘They’re not looking for us. They’re not looking for Hasan Minhaj or Prashanth Venkataramanujam, so we’ve got to make this on our own,’” says Minhaj, who, with Venkataramanujam, self-funded their pitch for “Patriot Act.”

So what does success look like for the Hollywood AAPI community moving forward? Exposure, both in front of the camera and beyond.

“In the past, it can often be that someone, like Ang Lee, does their ‘small personal project’ that is ethnic, or represents their family or where they come from.” Wang explains. “But then the sign of success is that they’re able to assimilate. They’re able to then go on to do studio movies that may, or may not, have anything to do with that personal story that they broke out with. What’s exciting now is that there’s so much more crossover, there is ways to go bigger and still integrate these elements, these nuances, and it doesn’t have to be one or the other.”

“To me, the more diverse, not in terms of ethnicity, but in terms of diverse types of stories about Asian people, in different genres, and auteurs creating their masterpiece that doesn’t necessarily have to do with being Asian, but has Asian people in it,” says Chu. “I look at these young, YouTubers who make feature stuff on their own now, it’s so exciting. They have even less baggage than my s—, that confidence is going to not just change what we see but actual cinema itself. Which we need.”

“Obviously, on-screen representation is important,” says Nanjiani. “But I think writing, directing, those things are very, very important because we just need more people telling their stories. If someone says, ‘Oh, you know that Asian movie? I want people to be like, which one?”