Kumail Nanjiani on Refusing to Play Up His Accent for a Major Role: ‘I Don’t Regret It’ 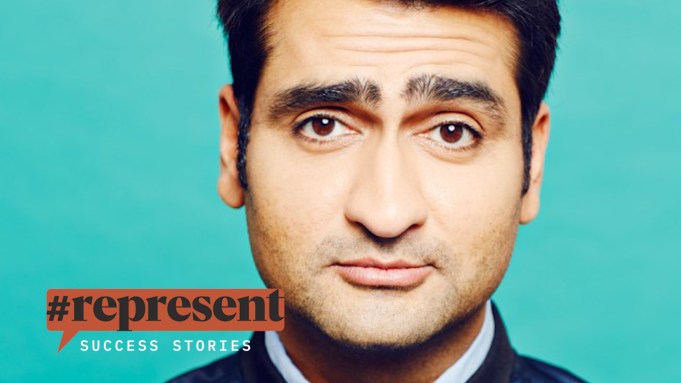 Kumail Nanjiani admits that despite an upcoming starring role in Marvel’s “The Eternals” and an Academy Award nomination in 2017 for co-scripting “The Big Sick,” he still struggles with feeling successful in Hollywood. But he felt a modicum of success when he started auditioning for parts that weren’t what he calls “stereotypical brown guy roles” or ones that required playing up his accent, like he had been doing during his first few years of auditioning.

“I have a Pakistani accent, but they would be like, ‘Could you make it funnier? Lean in a little bit.’ And at some point, I decided I just wasn’t going to do that,” he reveals on Variety’s “#REPRESENT: Success Stories.” “There are certain parts that require a thicker Pakistani or Indian accent, and that’s totally fine, but I just didn’t want the comedy to just be coming from someone exaggerating their accent.”

Still, that didn’t keep one director of a major movie from asking him to exaggerate it during his audition.

“So there was a really, really big movie, actually, that I auditioned for, and I was a taxi driver, and the director was like, ‘Hey, could you play up the accent a little bit?’ And I was like, ‘I’m sorry, I won’t.’ And then the guy felt really bad,” “The Lovebirds” star recalls. “And I was like, ‘No, it’s fine. I’m just not going to do it. If that’s what you want, I’m not your guy.’ And then that movie was hugely successful.”

He laughs before adding, “Still, I don’t regret it.”

While he does not name the movie in question, Nanjiani did say he auditioned for a part in the first “Deadpool” movie in a 2014 episode of his now-defunct podcast “The Indoor Kids.” On it, Emily V. Gordon — Nanjiani’s wife and collaborator — brings up him being asked to exaggerate his accent during auditions. “Which you have been asked to do, and often you’re like, ‘No, thanks,'” she said.

“Not if you get that superhero movie we’ve all been dreaming of,” added guest and Nanjiani’s “Silicon Valley” co-star Thomas Middleditch, referring to “Deadpool.” Nanjiani acknowledged he did not get a role. The irreverent Marvel superhero franchise includes the character Dopinder, a South Asian taxi driver, played by Karan Soni. Disney was not immediately available for comment when contacted by Variety.

Nanjiani joins fellow Asian American creatives Hasan Minhaj, Jon M. Chu, Lulu Wang and Ally Maki in the virtual roundtable, held in honor of Asian Pacific American Heritage Month in May. They reveal not only when they first felt successful in their careers, but also how their parents and family have reacted to their chosen fields. In Nanjiani’s case, he says his parents never ask him about what he does, despite being rabid fans of film and TV, and, in his mom’s case, Hollywood gossip.

But when the Pakistani American actor went viral for a picture of his muscular physique for “The Eternals,” Nanjiani says he finally earned some parental recognition.

“Only time they’ve said vocally that they’re proud of me. Only time. It’s the only time. My dad got socks with my shirtless body on them,” he says. “Literally, I had aunts texting me, ‘We’re so proud of you, you’ve worked so hard.'”

In the superhero film, bowing in 2021, Nanjiani will be playing Kingo, a cosmic being and Bollywood star. Fitting, since he modeled his own fitness goals after Indian actor Hrithik Roshan.

Regarding the challenge of getting movies made, especially starring diverse casts, Nanjiani candidly says it’s because studios are constantly playing a guessing game.

The “Little America” executive producer adds that progress for AAPIs in Hollywood means more representation both in front of and behind the camera, and more culturally nuanced stories on screen, including for the South Asian community.

“[When] we’re represented here, it all gets flattened into one thing. Indian, Pakistani, Sri Lankan, Bangladeshi, it all gets squished into one,” Nanjiani says. “Obviously, on-screen representation is important, but I think writing, directing, those things are very, very important because we just need more people telling their stories. … If someone says, ‘Oh, you know that hit Asian movie,’ I want people to be like, ‘Which one?’”

Watch the full roundtable from “#REPRESENT: Success Stories” below: